Accounting is the language of business.
Warren Buffett

In the early 1870s, the (Belo)Russian economist, theorist, and practitioner of accounting Theodor Ezersky (1835-1915) (he usually signed himself as Феодоръ Венедиктовичъ Езерскiй) devised a calculating apparatus (named Счеты Езерскаго-Abacus Ezersky). In 1872 Ezersky applied for patents in several countries, as the Russian patent was granted in 1874 (привилегия на “машинку для умножения и деления“), and a US patent was granted in 1873 (see US patent No. 144523 for Improved Calculating Machine). Later the calculator of Ezersky was described in several books and received quite a few awards in exhibitions, e.g. during the Centennial International Exhibition of 1876, the first official World’s Fair to be held in the United States, in Philadelphia, Pennsylvania.

Made by wood and metal, the calculating apparatus of Esersky was a combination of an abacus and a multiplication and division machine (rotating tables). Along the long plank of the frame of the device are placed two rollers, on which the tables are screwed. By rotating the rollers, it was possible to obtain partial results of multiplication/division, which were then added up on the abacus. In the 1870s and 1880s Ezersky’s apparatus was produced for sale (although on a small scale), and in various modifications, but it could not achieve market success.

The object of the invention of Ezersky is to produce a machine or table by means of which intricate multiplications and divisions may be rapidly and without difficulty effected; and the invention consists of the combination of an endless band or strip of paper, which contains rows of figures in a peculiar arrangement on both faces, with two rollers upon which the said strip is wound, and with a stationary indicator.

The apparatus (see the US patent drawing) is formed on frame C with a series of rods, F F, upon which sliding buttons G G may be hung to facilitate the process of addition or subtraction that follows the multiplication or division.

The instrument can be used readily, for the multiplication of large figures, the table can be brought to practical use by merely turning the two shafts A and B by means of handles formed at their ends, and thereby bringing the requisite row of figures of the sheet D directly above or below the row of figures on the plate E. For division, the apparatus is equally effective, and also for the finding of logarithms.

Theodor studied at Chernihiv district school, and as a teenager was highly influenced by his uncle Grigory Frantsevich Ezersky, who served as the manager of the accounting and control department of the Military Ministry, and taught his nephew accounting.

In 1853, Theodor was hired as a scribe in the Mogilev Chamber of the Civil Court. In 1861 he was seconded to the Warsaw quartermaster of the first army to establish new bookkeeping in the troops. In 1862, he worked in Astrakhan to revise the provisions department, as a member of the commission of inquiry in the case of abuses in the Tsaritsynsky provisions warehouses. In 1864-1865, Ezersky was a member of the temporary commission for the preparation of regulations on material accounting. In 1867, he audited various departments of the military department in Tver and Vilna.

In 1868 Ezersky retired and went to Dresden, Germany, where he studied accounting for several years and collected a rich library on this topic in various European languages. In 1870, his application for an invention was published in Moskovskie Vedomosti: “Russian triple bookkeeping”, an original form of financial statements. Yezersky’s further activity was devoted to the popularization of his bookkeeping system. 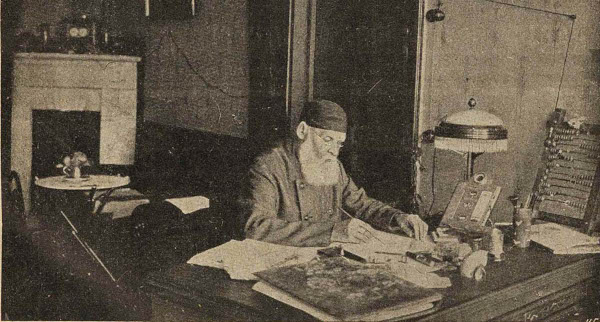 In 1874, Ezersky founded accounting courses, initially in St. Petersburg, and since 1887 in Moscow and in several other cities of the Russian Empire. He was the owner of typography and books distributing network. He was the author of many books and journals.