Just as the telescope and the microscope provided the additional power to our eyes, the intellectual machines would limitlessly strengthen the power of our mind…
Semyon Korsakov, 1832

In 1817 Semyon Nikolaevich Korsakov, an officer in Russian Justice Ministry and a veteran of the Napoleonic Wars, accepted a position in the statistics department of the Police Ministry in St. Peterburg. Inspired by his daily work, soon Korsakov was intrigued with the possibility of using machinery to enhance natural intelligence and began the construction of several devices which he called machines for the comparison of ideas. The purpose of these logical devices was primarily to facilitate the search for information (for homeopathic medicines and treatment), stored in the form of punched cards or similar media (e.g. wooden boards with holes).

Just like the earlier thinkers Ramon Llull, Athanasius Kircher and Gottfried Leibniz, Korsakov could see the perspective of the suggested mechanization of thinking, and just like Charles Babbage, he intended to use punched cards (or similar media, for example, wooden boards with perforations) as a memory holder (It is known that Korsakov was in Paris with Russian Army in 1814, so probably he had seen there the programmable loom with punched cards of Jacquard). His machines for comparing ideas, described and illustrated in the above-mentioned pamphlet, can be considered as the very first attempt to design a mechanical device capable to perform such intellectual operations as data analysis, comparison, and selection.

Later the same year, Korsakov presented his ideas to the Imperial Academy of Sciences in St. Petersburg, but their experts rejected his application, failing to see the potential of mechanizing searches through large stores of information. The commission, led by the famous mathematician Mikhail Ostrogradskyi, even made an ironic note: “Mr. Korsakov wasted too much intelligence, in order to teach other people to live without intelligence.” Interestingly, later the jester Ostrogradskyi will support some other Russian inventors of calculating devices like Kummer, Staffel, Slonimski, and Chebyshev.

Sadly, Korsakov’s seminal work in this area has remained obscure and largely unstudied until fairly recently. 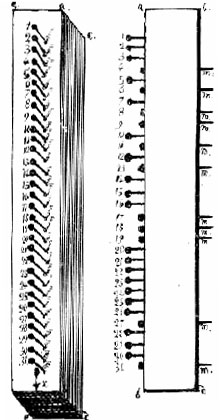 In the Homeoscope table can be set a number of “ideas”, as each column can represent one “idea” (Korsakov used the term idée compliquée – complicated idea) as a group of holes (each idée compliquée contains a number of (up to several hundred) les details, i.e. features or attributes).

The Homeoscope is a wooden lath, which height is equal to the height of the table, and it works as a “selector” of ideas. Using pins, which can be pressed down to stick out of the lower surface, we can set a pattern (search criteria) for the selector. Then, when we are moving the Homeoscope across the table we are actually searching for matching data (each pin of the Homeoscope corresponds to one row of the table), as the Homeoscope will fall down and stop its movement when (and if) it finds a column (idea), which has holes in the same rows, where the pins are pressed down.

In his brochure Korsakov gave the following example for practical use of this device:
If the ideas, signed as columns A, B, C, D, etc, in the table, are indicating the areas of use of different medicines, and rows are indicating different symptoms of diseases, which will be cured by these medicines, then we can set in the Homeoscope all the symptoms of a particular disease, and to move it across the table until will be stopped (a match will be found). Thus we can see which exactly medicine is suitable to be used for these particular symptoms. 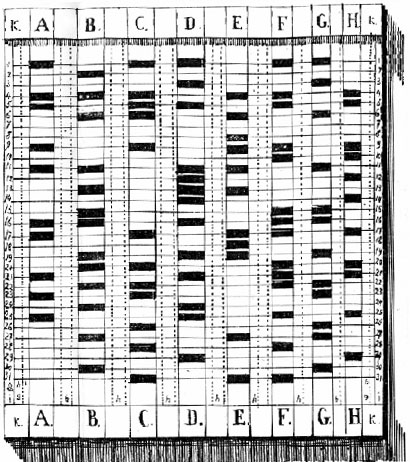 The Flat Homeoscope of Korsakov (see the nearby image) used two tables and compared the template (search criteria) from the upper table to the dataset (ideas) of the lower table.

The upper table (marked with A) has holes in all the cells, which can contain pins. The lower table is the same size, but has holes only in some cells, according to the idea (search criteria).

The Ideoscope is capable also to find during the comparison the relative importance of every detail. The number of compared ideas can reach several hundred, and every idea can contain more than a hundred details. Besides that, the Ideoscope (just like Homeoscopes, described above), can be upgraded in order to work with cylindrical tables.

The Simple Comparator of Korsakov (see the nearby drawing) consists of two wooden frames, and can produce the same four results, as the Ideoscope, but it is capable to work with two ideas, and comparing them in between. It can contain only several tens of details, but it excels the Ideoscope at that, because it doesn’t need a table or punched card to be prepared. It can be used for any kind of comparison between scientific topics or objects.

Semyon Nikolaevich Korsakov (Russian: Семён Николаевич Корсаков) was born on 14 January 1787, in Kherson, a town in modern south Ukraine (but then part of the Russian empire) in the noble family of the promising Russian military engineer Nikolai Ivanovich Korsakov (1749—1788), who was then the main engineer of the town, and his wife Anna Semyonovna Korsakova (nee Mordvinova) (1765—1849).

The founder of the Russian Korsakovs family was Ventseslav Zigmund Korsak (1370-1435), a Lithuanian noble of Check (or Volga-Bulgarian, according to other sources) origin, who in 1390 settled in Moscow. During the next centuries Korsakovs, and related families like Rimsky-Korsakov (the famous Russian composer Nikolai Rimsky-Korsakov is from that family), Dondukov-Korsakov, Miloslavski (Ventseslav had a brother Miloslav), etc., established as some of the most reputable Russian families.

In his youth, Nikolai Korsakov lived quite a long time in England, graduating from the University of Oxford with honors, and then working for several years in Glasgow, Scotland. After his return to Russia at the end of the 1770s, he became an aide-de-camp and favorite of the Russian Prince Grigory Potemkin, and married in 1786 to Anna Mordvinova, a godchild of the Russian Empress Catherine II.

In the 1780s Engineer-colonel Nikolai Korsakov was in charge of construction projects in St. Petersburg, Sevastopol, Simferopol, and Kherson, and established himself as one of the most promising Russian military engineers. After the beginning of the Russo-Turkish War of 1788-92 Korsakov put on the uniform and entered the order of general Alexander Suvorov. For only several months Engineer-colonel Nikolai Korsakov distinguished himself and was decorated with a military cross, but unfortunately, he died in his prime in an accident during the famous Battle for Ochakov оn 24 August 1788 (during a routine check of the military positions he slipped and fell down in a ditch and was pierced through by his own sword). Thus the only child of the family Semyon, who was only one during the incident, lost his father and grew up under the attention of his mother Anna, and her brother, admiral Nikolai Semyonovich Mordvinov (1754-1845), a Russian naval commander and statesman (see the nearby image).

After receiving a very good education, in 1805 Semyon Korsakov accepted a position in the Russian Foreign Ministry. From 1812 until 1814, Semyon Korsakov took part in the Napoleonic Wars with the Russian Army, was wounded during the famous Battle of Berezina, and received several orders (later in his life he was granted with prestigious Order of St. Anna and Order of St. Vladimir), and traveled with the army to Germany and France. Later he served as an official in the statistics department of the Russian Police Ministry in St. Petersburg, then was a highly ranked officer in Internal Ministry up to 1845, when he retired as acting state advisor (general).

Semyon Korsakov was married two times. From his first marriage, he had a son. From the second marriage to his cousin (a daughter of his patron admiral Nikolai Mordvinov) Sofia Nikolaevna Mordvinova (1797—1877) he had 11 children, two of them died young, so left 3 daughters and 6 sons, one of whom, Mikhail Semyonovich (1826–1871) (see the nearby photo), became famous in his own right as governor-general of Eastern Siberia and was the namesake of the town of Korsakov in Sakhalin Oblast and several Russian geological features.

Though Korsakov was not formally trained as a doctor, he was very interested in medicine and he treated tens of thousand of patients, at first using conventional medicine, but in 1829 switching to homeopathy. Later he was noted in homeopathic circles as the originator of a new method of dilution.

Korsakov was a very competent mathematician, who performed experiments with electricity, galvanoplastic, photography, etc. He was one of the first photographers in Russia.

Semyon Korsakov is known also for establishing in 1824 the first public information points (the Reference Place) in Russia, in St. Petersburg and Moscow.

In 1827 Semyon Korsakov bought an estate in the village of Tarusovo (on Dubna river), then part of the Moscow Province, and immediately relocated to live there with his family. He liked his new property very much, and testified this in writing:
The key of very good water is in the courtyard of Tarusovo; there is a very beautiful stone church across Dubna… The village is close. The peasants are well-looking, and are seeming modest, but not drunkards. They live in the villages of Tarusovo and Garyah. The peasant buildings of the neighbors are good, and have enough livestock and horses and live well. I seem to be loved because I made various significant improvements to them.

Korsakovs had a huge library with over 7000 books in the estate. They were a very hospitable family, and used to hold receptions, gathering many celebrities, between them: Ivan Andreyevich Krylov (Russia’s best-known fabulists), Count Lev Nikolayevich Tolstoy, Alexander Ivanovich Turgenev (a Russian statesman and historian), and others. Later Korsakov’s daughter, Natalia (1827—1915), opened in Tarusovo a school for peasant children, and she taught them literacy. In acknowledgment of Korsakov’s service, the peasants plundered and set on fire their estate after the 1917 Russian revolution.

Semyon Korsakov died on 1 December 1853, in his estate in the village of Tarusovo, and was buried there (see the nearby photo of his tombstone).