Doctor Illuminatus Ramon Llull is an amazing figure in the field of philosophy during the Middle Ages, and one of the first people who tried to make logical deductions in a mechanical, rather than a mental way. His method was an early attempt to use logical means to produce knowledge. He demonstrated in an extremely elementary (but nevertheless workable) way that human thought can be described and even imitated by a device. This was a small step toward the thinking machine. But every journey, even the longest, begins with a tiny step.

Around 1275, Llull designed a method, based on something like a logical machine, which he first described in full in his Ars magna generalis ultima. Ars brevis (“The Ultimate General Art”, published in 1305). This was a method of combining religious and philosophical attributes selected from a number of lists. It was intended as a debating tool for winning Muslims to the Christian faith through logic and reason. Llull’s inspiration for the Ars magna is thought to have come from observing a device called a zairja, which was used by medieval Arab astrologers to calculate ideas by mechanical means. It used the 28 letters of the Arabic alphabet to signify 28 categories of philosophic thought. By combining number values associated with the letters and categories, new paths of insight and thought were created.

The radical innovation Llull introduced in the realm of logic is, in fact, the construction and the use of a machine made of paper to combine elements of thinking, i.e. elements of language. With the help of connected geometrical figures, following a precisely defined framework of rules, Llull tried to produce all the possible declarations of which the human mind could think. These declarations or statements were nevertheless represented only by a series of signs, that is, chains of letters.

Let’s take a look at the hardware of Llull’s machine:

This doesn’t look very impressive, does it!? It is just three circles and some kind of alphabet.

This hardware consists of three circular paper disks fixed on an axis on which they can be turned. The paper disks contain a limited number of letters—a special lullistic alphabet. When the circles are turned, step by step, all possible combinations of these letters are produced. So what is the trick of this machine? Let’s look at the next figure: 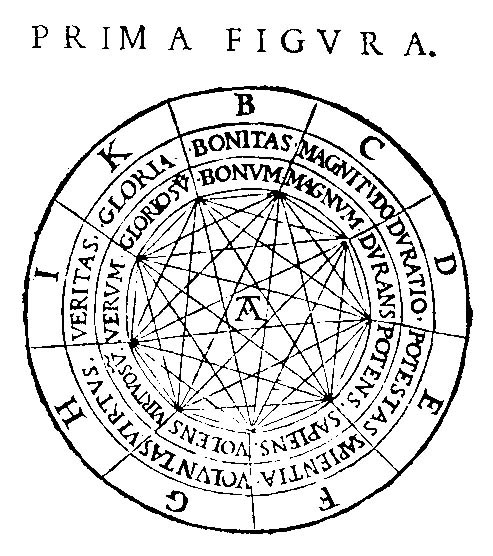 Every single letter, from B to K, represents not merely itself, but several strictly defined and placed meanings. By writing the letters from B to K as key terms heading a table, a series of different sentences can be easily constructed. For example, B=Bonitas, C=Magnitudo, D=Duratio, E=Potestas, F=Sapientia, G=Voluntas, H=Virtus, I=Veritas and K=Gloria. This is, initially, the paper circle called the Prima Figura. The next strictly defined table of words can be produced on the next circle, perhaps as seen on the Secunda Figura (shown below), where we find categories and relations of thinking. 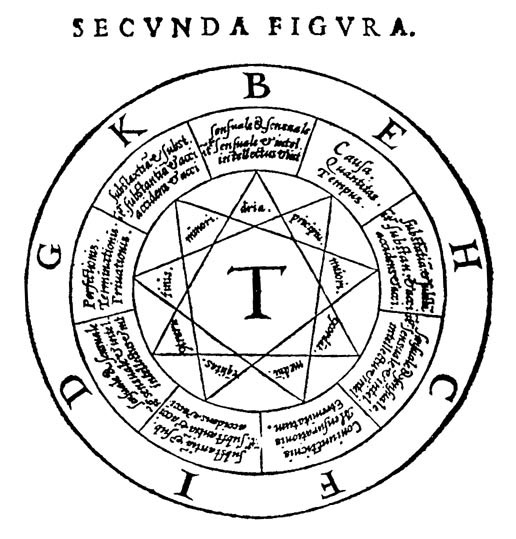 Hence the machine allows all the words to be combined by turning the circles step by step. In this manner, it is possible to connect every word with every other word placed in a position of a table—depending only on the construction of the individual tables. Imagine how Llull could play this out: bearing in mind the inscribed words of the Prima Figura. These nine words are none other than the attributes of God. Combined with a table of nine questions, it is possible to construct the skeleton of the “Proofs of God.” The machine shows all possible statements and declarations about God.

Examining the next design from the treatise, the so-called Tabula Generalis, we can find a very interesting table. Behind these series of letters are the hidden words of the utilized tables. These columns of letters are supposed to represent, very precisely, neither more nor less than, the totality of human wisdom;-), but actually the letters of the lullistic alphabet contain a rich potential of meanings. The connection to a certain site in each table allows each letter to represent unlimited words of unlimited fields. 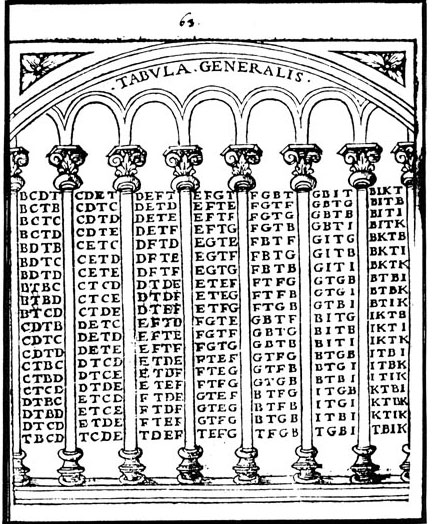 So, this Tabula Generalis must have been something like a subset of the truth table of the logic, described from the notions and defined in the circles. The logic itself consists of all possible reasonable combinations of the notions. While we have no rules, algorithms, or programs to tell which combination was right or wrong, we could have a truth table (One may just wonder “Who knows how to compose such a table, maybe God?”). And if we can include in the proper circle each human-defined notion, and we have a proper entry in the table, then we have what? Bingo! We have the Universal Wiseacre.

Llull’s ideas would be developed further by Giovanni de la Fontana and Nicholas of Cusa in the 15th century (in his work De coniecturis Nicholas developed his method ars generalis coniecturandi, in which he describes a way of making conjectures, illustrated by wheel charts and symbols that much resemble those of Llull), Giordano Bruno in the 16th century (Bruno used the rotating figures of the Lullist system as instruments of a system of artificial memory, and attempted to apply Lullian mnemotechnics to different modes of rhetorical discourse), and by Athanasius Kircher and Gottfried Leibniz in 17th century. That’s why Llull is sometimes considered a pioneer of computation theory, especially given his influence on Leibniz. 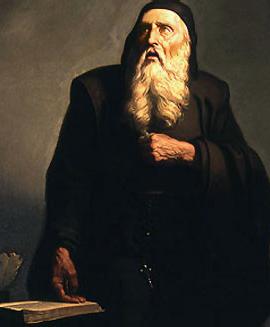 Ramon Llull was born in 1232 (or beginning of 1233) into a prosperous Catalan-Aragonese family in Palma, the capital of the just-formed Kingdom of Majorca. He was the only son of Ramon Amat (sobriquet Llull), who had come from Catalonia with the conquering armies of James I three years before, and Isabel d’Erill, who came to Majorca in 1231. Ramon and Isabel were members of bourgeois middle-class families in Barcelona, who in 1229 encouraged and financed the efforts of King James I of Aragon to conquer the island of Majorca, at that time under Muslim dominion, in exchange for land and privileges. Following the triumph over the Moors, they received lands and moved to the island.

Very little is known about his youth, but Ramon obviously was a restless and clever lad, who spent the first 3 decades of his life as a typical courtier, serving King James I and from the middle 1250s as a seneschal (the administrative head of the royal household) to the future King James II of Majorca.

In 1257 Llull married Blanca Picany (several years younger wealthy relative of the King), and they soon had two children, Domènec (Domingo) and Magdalena. Although he formed a family, he continued the licentious and wasteful life of a troubadour up to 1263, when he had a religious epiphany, and decided to dedicate his life to God. He sold his possessions, reserving a small portion for his wife and children, and made a pilgrimage to Santiago de Compostela. Upon his return to Mallorca, he dedicated the rest of his life to learning, translating, teaching, writing, and traveling through Europe and North Africa.

Llull was an extremely prolific author, and starting from the early 1270s he wrote a total of more than 250 works in Catalan, Latin, and Arabic, in a variety of styles and genres, and often translating from one language to the others. The romantic novel Blanquerna is widely considered the first major work of literature written in Catalan, and possibly the first European novel.

In 1314, at the age of 82, Llull traveled to North Africa to promote catechesis but was stoned by an angry crowd of Muslims in Tunis. Genoese merchants took him back to Mallorca, where he died at home sometime in the first quarter of 1316.