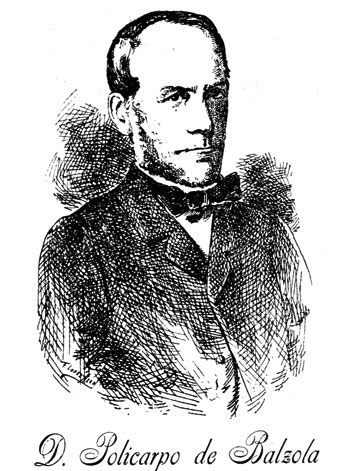 In the middle of the 1840s the Basque mathematician, surveyor, and inventor Policarpo de Balzola (1813-1879), from Irún (Guipúzcoa), Spain, invented his Arithmetical Machine, called Teclado Aritmético (Arithmetic Keyboard)—a keyboard-driven calculating machine that had the appearance of a piano (some ten years before the similar Piano machine of Thomas de Colmar).

In 1846 Balzola described his machine in a manuscript (see the manuscript of Teclado Aritmético) and ordered the wooden part of the prototype to be made in the piano factory of Apezteguía y Kneipe and the iron part in the blacksmith workshop of Juan José de Maritorena in Irun. The device had a wooden case with dimensions 91 x 61 cm, and 2 x 9 keys, and was described in several publications in early 1847. In February 1847 it was presented to Spanish Royal Court in Madrid and was highly appreciated by Queen Isabel II. In June the machine was presented to the Academia de Ciencias (Spanish Academy of Sciences) and described in several publications, for example in the 1 April 1847, issue of the newspaper Eco de Comercio.

Pressing a key puts in motion a gear wheel, thus entering the corresponding digit into the machine. There is a tens carry mechanism, to pass the motion to the next gear wheel during the transition from 9 to 0.

Balzola intended to modify the initial prototype, in order to be suitable for multiplication and division also, and to add an additional mechanism for the calculation of fractional numbers, but the modified prototype was destroyed in a fire. The inventor was unable to recreate the machine, because of his limited financial resources.

Policarpo de Balzola Iparraguirre was born on 26 January, 1813, in Irún, Basque Country, Spain. He was the third child of Miguel de Balzola Garamendi Emparanza y Arribalzagogesacoa from Guernica, a parish organist and choirmaster, and María Josefa Iparraguirre from Irún, a cloth merchant. Policarpo had an elder sister, Antonia, and a brother, Felipe.

Miguel de Balzola Garamendi was born in Guernica about 1760. His father, Miguel de Balzola Emparanza (a great-grandfather of the famous Spanish Basque composer Juan Crisóstomo Arriaga), was an organist and composer at the Church of Santa Maria de Guernica. Miguel Jr. succeeded in his father’s occupation and in January 1780, he accepted the position of teaching organist and choirmaster in the Church of Santa Maria del Juncal in Irun. He worked as an organist in Irun for 37 years, leaving in June 1817, stricken with insult and paralysis. Miguel de Balzola died on 23 April, 1823.

Policarpo de Balzola ended elementary school in his hometown, where he was fond of arithmetic and geometry. After the death of his father in 1823, the family led a poor life, so he had to work for his first revenues, in order to pay for some lessons that gave him a military engineer, who came to repair the fortifications of Irun, and presented to the boy some geometry, trigonometry, and drawing for a few months. Policarpo also took some lessons from the mayor of the town, Justo Urrutia.

In the early 1830s, the young Policarpo went to Madrid to take charge of a model farm established in the vicinity of the Court, under the protection of the State and remained there until he fell ill with pneumonia and was forced to abandon a climate that suited him so badly and to return to Irun in 1835.

After taking part in the First Carlist War (1833–1839), in which he actively participated as a member of the National Militia, in 1838 Policarpo de Balzola married Gabriela Echeverría y Ugalde from Irun, and they had four children: Isabel, Hermógenes, Valeriano, and Soledad.

In 1837 Balzola succeeded to get the position of a escribano (a notary) in Burgos, then he was appointed Secretario del Ayuntamiento de Irún (secretary of the City of Irun), in 1839 he was appointed escribano de la villa (notary of the town), and worked (in various positions) for his hometown until 1868. From 1847 until 1850 he hold the position of perito agrimensor (expert surveyor) in Tolosa, a job that allowed him to draw plans for small and large construction projects, e.g. the original layout of the Bidasoa railway. In the early 1860s (1861-65) Balzola designed Paseo de Colón (the Main Street) of Irun.

In the 1840s, besides his calculating machine, Balzola invented a mechanical perpetual calendar (el calendario perpetuo mecanico) and got a patent (privilege) to sell it for 15 years, a measuring device for surfaces, and a scoring mechanism.

In 1849, Policarpo de Balzola went on to become a key figure in the establishment of the metric system in the Spain and Basque Country. In 1853 he published a book (Aritmética con la explicación del Sistema métrico escrita por encargo de la Diputación de la M. N. y M. L. provincia de Guipúzcoa por Policarpo de Balzola) to spread the use of metric units. Besides this book, Balzola is the author of several other books on metric systems, universal harmony, calendars, and others, like “Notes on the theory of the Harmony of the Universe”, “Shortcut Method for the resolution of the issues interest and medium-term with application of the mode of settling accounts currents with interest by means of the table of mechanical interests and how to resolve by means of the same table a number of other issues”, “Sketch on the theory of numbering”, and others.

Policarpo de Balzola was a politically controversial but affable and funny character with a sense of humor, a good dancer, and his capacity for work and his passion for learning, always in favor of their community, still appear admirable. For his merits, in 1859 Balzola was distinguished as Caballero de la Real and received the Orden Española de Carlos III, and in 1865 he was granted the order of Isabel la Católica. He was also a member correspondent of the Spanish Institute.

At the beginning of the Third Carlist War (1872–1876), Balzola was in charge of collecting indirect taxes in the province. He took advantage of this responsibility to introduce the use of the decimal metric system in the provincial Treasury. When Irún was besieged and bombarded by the Carlists in 1873, Balzola collaborated in its defense.

Policarpo de Balzola died on 1 February 1879, at his home on the main street of Irun.