Information is information, not matter or energy.
Norbert Wiener, Cybernetics, 1948

Norbert Wiener (1894–1964) was a remarkable man. He was born in Columbia, Missouri, in the American-Jewish family of Leo Wiener (1862–1939), of Lithuanian-Jewish origin, and Bertha Kahn (1867-1964) (German-Jewish). Norbert’s father Leo (born in Byelostok in Tsarist Russia and came to the USA in 1880) was an American historian, linguist, author, translator, and remarkable polyglot (Leo knew more than twenty languages). Since 1896 Leo taught at the cathedra of Slavic cultures at Harvard University and became the first American professor of Slavic literature.
The young Norbert was a child prodigy, educated at home by his father. After graduating from Ayer High School in 1906 at 11 years of age, Norbert entered Tufts College. He was awarded a BA in mathematics in 1909 at the age of 14, whereupon he began graduate studies in zoology at Harvard, obtaining a Ph.D. degree in 1912.

Later Wiener made significant contributions in mathematics, and pioneering contributions to electronic engineering, computer science, artificial intelligence, robotics, computer control, and automation. He is titled the father of cybernetics.

Wiener’s strangeness was proverbial in the scientist’s circles. Some people laugh at his somewhat baroque, short, rotund, and myopic figure, his wanton and pompous speech, but in contrast to most of them, he shared his theories and findings with other researchers and credited the contributions of others. These included Soviet researchers and their findings (it was very dangerous and placed him under suspicion during the Cold War). He was a strong advocate of automation to improve the standard of living and overcome economic underdevelopment. He declined an invitation to join the Manhattan Project. After the war, he became increasingly concerned with what he saw as political interference in scientific research, and the militarization of science. His 1947 article “A Scientist Rebels” urged scientists to consider the ethical implications of their work. After the war, he refused to accept any government funding or work on military projects.

During World War II, Wiener worked on guided missile technology and studied how sophisticated electronics used the feedback principle, as when a missile changes its flight in response to its current position and direction. He noticed that the feedback principle is also a key feature of life forms from the simplest plants to the most complex animals, which change their actions in response to their environment. Wiener developed this concept into the field of cybernetics, concerning the combination of man and electronics, which he first published in his 1948 book Cybernetics.

Wiener’s vision of cybernetics had a powerful influence on later generations of scientists and inspired research into the potential to extend human capabilities with interfaces to sophisticated electronics, such as the user interface studies conducted by the SAGE program. Wiener changed the way everyone thought about computer technology, influencing several later developers of the Internet, most notably Licklider.

In his 1948 book and subsequent works, Wiener develops a theory of communication and control. He coins the term cybernetics (actually first known use of the term cybernetics was in an 1834 book of the great pioneer of electrical studies André-Marie Ampère, but he used it to refer to the study of peoples) to elaborate on the existing theory of the transmission of messages by incorporating his idea that people send messages within a system in an effort to control their surrounding environment. In his theory, Wiener compares humans to machines to illustrate how human communication is no different from the way machines function when given an order to complete a task. This is to say that when a human sends a message, they are only aware that it has been received once the recipient replies, either verbally or nonverbally. Additionally, he suggests that humans operate in a machine-like manner that is highly based on information processing and the constant desire to control our environment as well as the environment of those around us. According to Wiener:
… society can only be understood through a study of the messages and communication facilities which belong to it; and that in the future development of these messages and communication facilities, messages between man and machines, between machines and man, and between machine and machine, are destined to play an ever-increasing part. 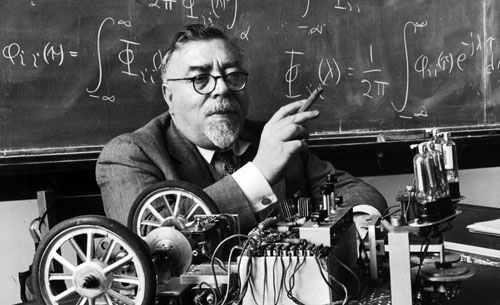 The basic function of communication, which Wiener defines in his theory as the processing of information, is to control the environment in which one lives. Wiener asserts:
…information is a name for the content of what is exchanged with the outer world as we adjust to it, and make our adjustment felt upon it.

This idea suggests that the goal of human communication is to become familiarized with a certain environment while simultaneously influencing aspects of it. With this, Wiener wrote:
The purpose of Cybernetics is to develop a language and techniques that will enable us indeed to attack the problem of control and communication in general, but also to find the proper repertory of ideas and techniques to classify their particular manifestations under certain concepts.

Thus, he defines the problem with communication in terms of control and system malfunctions through the understanding of the Cybernetic theory.