This article was created with the expert advice of my correspondent Mr. Silvio Hénin, Milan, Italy
Georgi Dalakov

In Leonardo’s manuscript Codex Madrid I, compiled by the genius in 1493, when he served at the Castle of Milan under duke Ludovico il Moro, there is a sketch, picturing a mechanism, which is very likely to be designed for calculating purposes.

Leonardo da Vinci is probably the most diversely talented person ever to have lived. He was a remarkable painter, engineer, anatomist, architect, sculptor, musician, etc. During his life, Leonardo produced thousands of pages of perfectly illustrated notes, sketches, and designs. A part of these pages (only half of almost 13000 original pages), as impressive and innovative, as his artistic work, managed to survive to our time. They are collected now in 20 notebooks (so-called codices), comprising some 6000 pages. These codices decorate expositions of many museums (the only codex, that is in private hands is the Codex Leicester, a small volume of only 36 pages, which was purchased in 1994 by Bill Gates for $30.8 million).

Some of the manuscripts were so thoroughly lost, that they weren’t found again until the last few decades! In February 1965, an amazing discovery was made by Dr. Julius Piccus, Professor of Romance Languages ​​in Boston, working in the Biblioteca Nacional de España (National Library of Spain) in Madrid, who was searching for medieval Spanish ballads and troubadours. Instead of ballads, searching in some cabinets, he stumbled upon two unknown collections of Leonardo’s manuscripts, bound in red Moroccan leather, which were known by the Spanish librarians, but were not described yet (the public officials stated that the manuscripts “weren’t lost, but just misplaced”, because of an error in the catalog).

These manuscripts were in the collection of the 16th-century Italian sculptor Pompeo Leoni (1533-1608) and were taken by him to Spain, to be offered to the Spanish King Felipe II in the 1590s. For some reason, Leoni kept the collection in his house, and after his death, it was divided into several parts, which went to England, France, and Italy, but few remained in Spain and in 1642 were donated to King Felipe IV, to become later a part of the Royal Library (later Biblioteca Nacional) in Madrid. These manuscripts (almost 700 pages, on subjects such as architecture, geometry, music, mechanics, navigation, and maps) are now referred to as Madrid Manuscripts or Codex Madrid I and Codex Madrid II.

Codex Madrid I (composed of 192 pages with a size 21/15 cm) is an engineer’s delight treatise on mechanics, full of perfectly drawn and laid out gadgets, gears, and inventions. Interestingly, this codex was not put together after Leonardo’s death (which is for example what happened with the miscellaneous contents of the Codex Atlanticus, the largest collection of Leonardo’s manuscripts), but it was in fact Leonardo himself who put it together and it has survived almost intact, except for 16 pages, which have been torn out and seem to have been lost. Codex Madrid I can be called the first and most complete treatise in the history of Renaissance mechanics, and in it there is a sketch, picturing a mechanism, which is very likely to be designed for calculating purposes.

The language of Leonardo is never easy to understand because it is indeed quite cryptic and his writings are more private notes, than a clear explanation for readers. A rough translation of the text below the figure is: This manner is similar to that of the levers, although different, because, being this made of gears with their pinions, it can move continuously, while the levers cannot.

The Italian engineer, Dr. Roberto Ambrogio Guatelli (born 4 Sep. 1909 in Binago, near Milan-died Sep. 1993), a science and engineering graduate from the University of Milan, was a world-renowned expert of Leonardo da Vinci, who specialized in building working replicas of Leonardo’s machines since the early 1930s. When in the late 1930s his collection (some 200 models) went on exhibit, Italian dictator Mussolini was so pleased with this great example of Italy’s engineering heritage, that he decided to fund a traveling exhibition to impress the whole world.

In 1940 Guatelli, emerging as one of the leading model makers, traveled to New York for an exhibition at the Museum of Science and Industry in the Rockefeller Center. When World War II broke out, Guatelli was forced to flee to Japan with his models, but there he was interned, and the models blew to bits in a bombing of a warehouse, in which they were stored. After his return to Italy, he was invited to show again his models in the USA, so he began rebuilding his models, and created about 60 new devices.

In 1947 Guatelli had an exhibition at the Ford museum in Dearborn, Michigan. Eleanor Roosevelt, who was visiting the museum introduced Guatelli to Thomas Watson Sr. who was also visiting. Watson recognized Guatelli’s genius and hired him in 1951 to rebuild more of his models for IBM which then toured them as a corporate-sponsored exhibition. IBM placed a workshop at Guatelli’s disposal and organized traveling tours of his replicas (see the upper image of Guatelli, demonstrating one of his models), which were displayed at museums, schools, offices, labs, galleries, etc.

In 1967, shortly after the discovery of the Madrid Manuscripts, Guatelli went to the library of the Massachusetts Institute of Technology (MIT), to examine its copy of the manuscripts. When seeing the page with the above-mentioned sketch, he remembered seeing a similar drawing in Codex Atlanticus. In fact, Codex Atlanticus contains a lot of gear-wheel transmissions, see for example the lower sketch.

The left and the middle drawings are of hodometers, devices for measuring distance, known for many centuries (it seems the first odometer was described by Heron of Alexandria, who used an analogue train of gear wheels (linked so that each time one wheel completes a revolution the next wheel turns one-tenth of a revolution, thus recording a carry), while the right drawing is of a ratio mechanism. Leonardo certainly was not the inventor of gear-wheels and the hodometer, and he knew very well at least the fundamental treatise of Vitruvius—De architectura, written about 15 BC. In Book X, Chapter IX of this treatise is described a hodometer with gear-wheels and a carry mechanism.

Using the two above-mentioned drawings, in 1968 Dr. Guatelli built a hypothetical replica of Leonardo’s calculating device (see the lower photo). It was displayed in the IBM exhibition, as the text beside the replica was:
Device for Calculation: An early version of today’s complicated calculator, Leonardo’s mechanism maintains a constant ratio of ten to one in each of its 13-digit-registering wheels. For each complete revolution of the first handle, the unit wheel is turned slightly to register a new digit ranging from zero to nine. Consistent with the ten-to-one ratio, the tenth revolution of the first handle causes the unit wheel to complete its first revolution and register zero, which in turn drives the decimal wheel from zero to one. Each additional wheel marking hundreds, thousands, etc., operates on the same ratio. Slight refinements were made on Leonardo’s original sketch to give the viewer a clearer picture of how each of the 13 wheels can be independently operated and yet maintain the ten-to-one ratio. Leonardo’s sketch shows weights to demonstrate the equability of the machine.

After a year the controversy regarding the replica had grown and an interesting Academic trial was then held at the Massachusetts Technological University, in order to ascertain the reliability of the replica.

Amongst others were present I. Bernard Cohen (1914-2003), professor of the history of science at Harvard University—consultant for the IBM collection, and Dr. Bern Dibner (1897-1988)—an engineer, industrialist, and historian of science and technology.

The objectors claimed that Leonardo’s drawing was not of a calculator, but actually represented a ratio machine. One revolution of the first shaft, would give rise to 10 revolutions of the second shaft, and 10 to the power of 13 at the last shaft. And what is more, such a machine could not be built, due to the enormous amount of friction that would result. Dr. Guatelli managed to build a replica, but the technology in the 15th century was so primitive, compared to ours, that a working machine cannot be built. 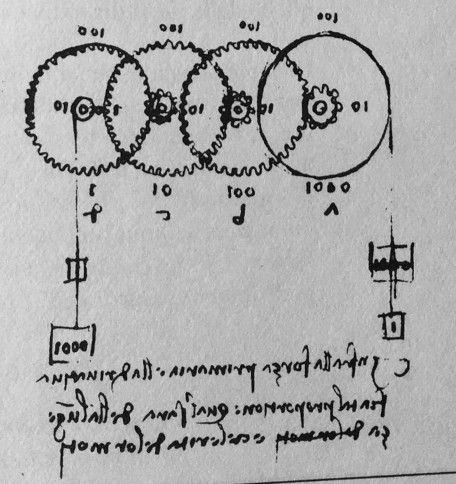 It was stated that Dr. Guatelli had used his own intuition and imagination to go beyond the statements of Leonardo. The vote was a tie, but nonetheless, IBM decided to remove the controversial replica from its display.

Sadly, it seems the objectors were right, because such mechanisms were quite popular several centuries ago. There is another picture on the same Codex Madrid I (f. 51v), which is describing a similar mechanism (see the nearby image). Leonardo’s text below the picture says: Quando la rota d dà una volta intera, la rota c ne dà 10 e lla rota b ne dà 100, e così la rota a ne dà 1000. Onde, per l’oposito, si scanbia la forza, come detto nella 2a del sesto di sopra, che dov’è magiore il moto, lì è magiore forza. (When wheel d makes one full turn, wheel c makes 10 turns and wheel b makes 100, and so wheel a makes 1000. Thus, the force changes the other way round, as said in 2nd paragraph above, that where higher is the movement, higher is the force. [This statement seems wrong, but what Leonardo means is possibly that the same torque applied to a is ten times more efficient (in rising the right-end weight) that when applied to b]

Moreover, a similar mechanism can be seen (see the lower image) in the famous encyclopedia Theatrum Machinarium of Jacob Leupold.

My correspondent Mr. Silvio Hénin from Milan (the author of historic investigations of the machines of other Italian inventors, like Luigi Torchi and Tito Gonnella), also thinks that Guatelli was almost certainly wrong. Mr. Hénin was so kind to give his expert opinion regarding this matter:
Leonardo was possibly studying the properties of gear trains in comparison with systems of levers; both can multiply forces (torques), but only gears can produce a continuous movement. In the other direction the gear train can multiply rotation speed. On the same page, in fact, a compound pulley system is shown, which has the same force-multiplying properties as a gear train, a demonstration of what Leonardo was examining.
I can only add some points:
1. Leonardo’s drawing does not show any numbering on the gear wheels (mandatory for a calculator).
2. No way to set the operands is shown (which is mandatory).
3. No way (e.g. ratchet) to stop the wheels in precise discrete positions (which is mandatory) is shown.
4. Two weights are shown at the two ends (useless in a calculator).
5. The use of 13 decimal figures for calculations in XV century is quite a nonsense.

Guatelli worked for IBM until 1961, when he left and opened a workshop in New York. Interestingly, Guatelli built models not only of Leonardo da Vinci’s calculating device, but also of numerous other calculators; for example, the Pascaline of Blaise Pascal, the Stepped Reckoner of Gottfried Leibniz, the Differential Engine of Charles Babbage, the adding machine of Giovanni Poleni, the tabulating machine of Herman Hollerith, and the Millionaire direct multiplier of Steiger and Egli.