By seeking and blundering we learn.
Johann Wolfgang von Goethe

First two calculators of Ballou are simple devices, but the third (see US patent №27418) is a more elaborate contrivance, and the patent model survived to the present, kept in the National Museum of American History, Washington (see the lower image), so it deserves our attention. Interestingly, this calculator is quite similar to the adding device of Jabez Burns, patented only a month before.

The lever-set adding device has a metal casing, painted black, and a wooden bottom. The curved front of the machine has slots for six movable wheels, the right-hand wheel operated for units, the next for tens, etc. The part of the case to the right of each ring is marked with the digits from 0 at the bottom of the curve to 9 at the top. A crosswise shaft in the machine carries a series of six-toothed metal rings that fit between the openings in the case and serve as finger wheels, ratchets, and registers. The digits are inscribed around their edges of the rings, next to the teeth. One digit of each wheel is visible at the top of the machine, showing the result when numbers are entered by turning rings forward.

A tens carry mechanism is also provided—the left side of each ring has a pin (a shifter) every ten places, which drives the adjacent wheel when carrying is required. 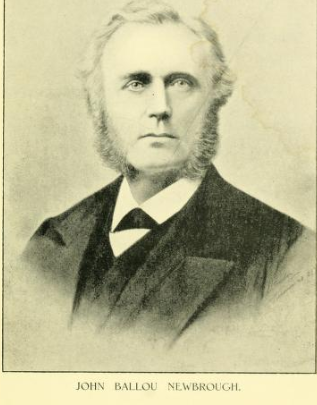 William Newbrough was a British American (Newbrough family comes from Aberdeenshire, Scotland), born in Maryland. Elizabeth Polsley was a Swiss American (Baltzli->Balsley->Polsley family comes from Langnau, canton Bern, Switzerland), born in Morgantown, West Virginia, who was attracted to spiritualism. Newbroughs lived off the land, raising their own food, but William Newbrough was an educated man, who had attended the famous William and Mary College in Virginia and used to work as the local schoolmaster in Mohicanville.

John Ballou was clairvoyant from childhood, although his father was a stern man, flogging his son when the latter began to receive spirit messages. John was educated in the local schoolhouse, and at only 16 he taught school during the winter of his last year at home. In 1844 he went to Cleveland Medical College to study both medicine and dentistry, where his schooling was paid for by his mother selling wool and eggs and John working as a dental assistant to the famous dentist Dr. Franklin S. Slosson, helping to make dental plates and taking impressions for false teeth.

In 1849 John Ballou graduated from Cincinnati Dental College, and then worked for a short time under the supervision of his uncle, who was the head physician in an “insane asylum”.

In 1849 John Ballou and his Scotsman partner, John Turnbull, moved to California (in 1848 California Gold Rush began). They were successful, accumulating a small fortune, and afterward, in 1851, they mined gold in Australian gold fields of Ballarat also, where Newbrough struck a claim worth $25000.

After making his fortune and circling the globe, Newbrough returned to the US in 1855. He shared part of his good fortune with his family back in Ohio, where his parents and younger siblings still lived. Then he began to practice as a physician in Cincinnati, but soon switched to dentistry and moved to Dayton and St. Louis.

On 24 February 1860, John Ballou married Rachel Turnbull (1837-1918), a sister of his gold field partner John Turnbull, in the Presbyterian Church at Jedburgh, Scotland. The Newbroughs settled initially in Philadelphia, where John practiced dentistry until 1862, then moved to New York City for more than twenty years. They had three children: the boys William (1860-1919), who became a civil engineer, and George (1862-1864), and the daughter Elizabeth (1865-1954), who became an artist.

John Newbrough was a writer and poet. His first novel was a 600-page book about his experiences in the California Gold Rush: The Lady of the West, or the Gold Seekers, printed in Cincinnati, in 1855, was a love story during the adventure. Later he published several other books, between them one, which made him famous: Oahspe: A New Bible. It was published in 1882, purporting to contain new revelations from …the Embassadors of the angel hosts of heaven prepared and revealed unto man in the name of Jehovih…. Newbrough reported it to have been written by automatic writing (he owned a Sholes typewriter), making it one of a number of 19th-century spiritualist works attributed to that practice.

John Ballou fathered a daughter, Jone “Justine” Ballou (born on 1 January 1884, died 1973), to his dental assistant Frances Vandewater Sweet (1860-1922, see the nearby portrait). In April 1884, his wife Rachel ordered him to leave their house in New York City (they divorced in 1886 and Newbrought married Frances Vandewater). Newbrough and Vandewater moved to a farm at Pearl River, New York, which by March 1884 they named “Camp Hored”, the staging place for founding Shalam Colony, as outlined in Oahspe.

Later in 1884, Newbrough and Andrew Moore Howland (1834-1917), a member of a distinguished New England family and heir to a vast whaling fortune, set out to find an appropriate site for the colony, and selected 1490 acres in Las Cruces, New Mexico. Soon, 22 Faithists arrived and settled a colony, to care for and raise foundlings and orphan children to better world as adults. The colony and Newbrough himself had a lot of problems, but managed to survive somehow until 1891, when ultimate disaster befell the colony. An outbreak of influenza devastated the area, and Newbrough himself was struck down, dying on 22 April 1891. For almost a decade, Frances Newbrough and Andrew Howland (Frances married to Howland in 1893) attempted to revive the faded dream, struggling to keep the colony going. By 1900, Shalam was destitute. The school closed, children rebelled and colonists squabbled.

John Ballou Newbrough was an inventive man and a holder of numerous US patents, between them three patents for calculators, and also for the manufacturing of rubber (US patent 73916, for this patent he ran into trouble with the Goodyear Rubber Co., because he developed a much cheaper compound to set teeth in dental plates than the one produced by Goodyear, which dominated the market), artificial teeth (US85927), furnace pot (US115677), car for railway (US121539), ventilator (US142140), exercising apparatus (US169467), and others.