The individual has always had to struggle to keep from being overwhelmed by the tribe. If you try it, you will be lonely often, and sometimes frightened. But no price is too high to pay for the privilege of owning yourself.
Friedrich Nietzsche

The Polish economist, financier, linguist, engineer and inventor Jan Józef Baranowski was the author of many technical inventions, 17 of which have been patented in France. Interestingly, at least five of them are for calculating devices:
1. Machine for obtaining the products of numbers without multiplying (Brevet №4587 from 1846 for Machine propre à obtenir les produits des nombres sans faire la multiplication).
2. Calculating watch operating the four rules of arithmetic (Brevet №2663 from 1847 for Montre à calcul opérant les quatre règles de l’arithmétique).
3. Tax-machine from 1848 (taxe-machine pour obtenir les résultats des calculs les plus compliqués même ceux des changes et arbitrages de banque, avec un contrôle instantané).
4. Machine for calculation of the votes in the elections from 1848.
5. Cylinder for wages and freight.
The first calculating machine was patented in the USA also (US patent №5746 from 1848 for reckoning machine).

Let’s examine the first reckoning machine of Baranowski, using the US patent (see the nearby drawing).
The first reckoning machine of Baranowski consists of a commercial table or ready-reckoner containing the various results previously calculated and arranged consecutively in units, tens, hundreds, etc. (as well as in fractional parts, when desired) of suitable apparatus for bringing the numbers of such table into view, of a face-plate with openings formed in it to admit of any portion of such commercial table or ready-reckoner being seen when required, and, lastly, of a number of accurately-fitted slides, any number of which can be withdrawn for the purpose of exhibiting the numbers constituting the required result, the other numbers not required for the result to be ascertained being concealed from view.

The slides and the face-plate are so adapted and arranged that the operator may readily see from the front of the machine which slides to withdraw in order to disclose any required result. The operation of the machine, then, consists in the display of the particular result required on the withdrawal of the proper slide by the operator when such result is to be exhibited by a single number or sum on the tabulated surface; but when the result is to be exhibited by or consists of two or more numbers, then two or more proper slides have to be withdrawn, by which the two or more numbers are displayed, which being added together give the final result, and the same principle is to be followed to any extent required, the machine being, of course, adapted to the particular kind of tabulated surface to be used with it.

Thus the ascertainment of the result by means of the machine becomes reduced to the simple operation of exhibiting to view the number constituting the result required or the numbers to be added together for such result with the greatest facility.

The Baranowski Tax Machine (see the nearby photo) was a specialized tabular calculator, built in France circa 1849, which was used for general employee payrolls. The machine was awarded a medal in 1849 at the French National Exhibition in Paris, attracting much curiosity through its method of controlling every type of account. Baranowski made a special machine for the Minister of Public Works to “control” the tariffs of all the French Railways. The machine has been exploited widely in France and England for calculating wages. One hundred machines were supplied to the various gold, copper, and malachite mines of Prince Demidoff. They have also been used for calculating interest at different rates (3, 4, 5, 6%). One was specially built in 1849 with calculations in Russian money for the office of the Emperor of Russia.

5. Cylinder for wages and freight.

Jan Józef had shown, since infancy, a great predilection and capacity in mechanics. He was educated in a noble boarding school in Śmiłowiczach, then at the Public School and Classical Gymnasium in Minsk. There he particularly distinguished himself in the classes for physics and mathematics, and studied also with great eagerness the French and German languages.

In 1821 Jan Józef enrolled at Vilnius University, studying physics and medicine, but in 1825 he was transferred to the faculty of law, obtaining in this field a degree of bachelor in 1828.

Immediately after graduating in 1828, Baranowski was admitted into the office of the National Bank of Poland in Warsaw, and was promoted shortly to the post of Under-Secretary for foreign correspondence. In 1830-1831 Baranowski took part voluntarily in the November Uprising, participating in many battles. At the end of the uprising, he retreated to Austria where he was interned.

Since 1832 Baranowski was in exile in France. Initially, he settled in Gray, Lyon and Chalon-sur-Saône, where he worked as a banker and trader in department stores. In 1837 he moved to Paris, taking a job as a teller in the bank Jelski, Dussard et Compagnie. In the years 1843-1848 he worked as an inspector of the rail-road Paris-Rouen-Le Havre. For the purposes of the company he developed a bookkeeping system, that was highly appreciated and implemented by other French railway companies. 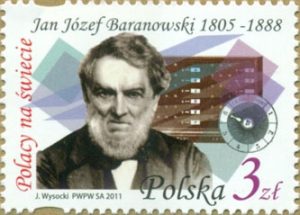 In 1848 Baranowski quit his job and devoted himself entirely to inventive activities. In the next years, he patented 17 inventions, between them: gas meter, ticketing machine, printing machine for tickets, automatic railway signaling (semaphore), several calculating devices (tax machine, voting machine, and two calculating machines). In 1851 he obtained, at the Universal Exhibition in London, a prize medal with a diploma for a small machine which printed in many colors, and stamped in the most accurate manner possible, railway, theatrical, and other tickets.

In 1871, after the Franco-Prussian War, France was ordered to pay a huge tribute. Baranowski presented to the authorities a plan for the government loan, which was approved with small modifications. For his proposal however he did not receive any awards, and embittered Baranowski decided to leave France and in 1872 he moved to London, where he took a job as an Under-Secretary to the Literary Association of the Friends of Poland, in charge of the development of dictionaries (Baranowski was a polyglot, who knew besides his native Polish, also German, French, and English.) In London, he published several books required in the study of languages, e.g.: Vade-Mecum de la Langue Francaise, The Student’s Anglo-Polish Grammar.