“One man’s “magic” is another man’s engineering. “Supernatural” is a null word.
Robert A. Heinlein

In 1727, after the death of the German scientist and engineer Jacob Leupold was published the 8th volume of his encyclopedia Theatrum Machinarium. This volume, entitled Theatrum arithmetico-geometricum is the best-illustrated work on calculation and measurement published during the 18th century. It describes and illustrates the calculating devices and machines of Kircher (Schott), Grillet, Leibniz, and Poleni, along with Napier’s rods and several calculation tables (interestingly, Leupold missed the Pascaline, the most famous calculating machine of the time). It also discusses and illustrates the various analog devices available, including slide rules and sectors, and other calculating and measuring rules, as well as systems of computing using the fingers. In this volume Leupold not only mentioned that “he was interested in calculating machines more than 20 years”, and “he had four or five types brought out”, and that “he had been able to show the effect to different friends”, but also described an original calculating machine, designed by himself.

Obviously an example of the above-mentioned calculating machine of Leupold has never been manufactured. In fact, Leupold defined himself as Mathematico und Mechanico (i.e. Mathematician and Mechanic, what we today would call Engineer) because he did not produce machines in his pursuits, but he studied them, corrected the errors he found in those designed by others, and designed machines and solutions of his own.

The Mechanical Calculator of Jacob Leupold

The calculating machine of Leupold has a circular shape which will very soon become very popular in the world of mechanical calculators. Yet in 1727 the calculating mechanism and the form of Leupold’s machine will be used by the German mechanic Anton Braun, who designed a similar device. Several machines, which appeared to be similar (not only) externally to Leupold’s will be devised later by Philipp Matthäus Hahn, Johann Helfrich Müller, Johann Reichold, and others.

The numbers are entered into the calculator by means of six small digital wheels, placed around the handle in the middle of the lid. Rotating this handle to a full revolution in a counterclockwise direction will transfer entered in the input mechanism number to the six dials (digital positions), placed in the outer ring (marked with A on the nearby figure), which present units, tens, hundreds, etc. The resulting mechanism has nine positions—the nine dials F, mounted on the outside ring (marked with C in the figure). The dials F have two graduations—the first is used during addition and multiplication, the second—during subtraction and division. The digits of the result are pointed by special pointer-arrows, which are rotating around the middle of the axes.

On the same axes, but inside of the machine (see the figure below), are placed 10-teeth stop-wheels G, M, I…, which can be rotated only in one direction (clockwise), and can be fixed by means of the small rod D and spring-rod C.

The motion from the input (six small dials) to the result (nine bigger wheels in the ring C) is transferred by means of the 9-teeth sector-teeth-strip N, which can be rotated around axis w. On the strip N, on the plane, perpendicular to it, is attached a thin plate X, which is illustrated separately in the upper right part of the figure. The left side-ward surface of the plate is straight, the right is formed as nine steps of the same height. The function of this plate is to raise the teeth strip, which will engage with the result mechanism and will rotate it. That is done in this way:
Bellow each one of the entering wheels is placed a ring with a spiral inclined upper surface A, which is shown in the upper left part of the figure. Each position of the input mechanism has an eccentric rod (marked with m, n, and o), which has a bulge in its upper part, contacting the plate X, and another bulge in its lower part, contacting to the spiral surface of the ring. Rotating one of the six entering wheels, thus rotating the appropriate ring, we actually will raise or take down these eccentrics in a plane, perpendicular to the plane of the teeth-strip and parallel to the plane of the plate X in this way, that upper bulge will raise and fix in the upper position this plate for a different distance, and in this way, a different number of teeth will be engaged with the top-wheels G, M, I. Thus, the number of the teeth, to which will be rotated on each of these wheels, is determined by the length of the engaging way of the eccentric with the plate X.

The invented by Leupold mechanism will become quite popular at the end of the XIX century in several calculating machines, e.g. machines of Dietzschold, Büttner, and Pallweber. It will be called Schaltklinke in German, in English it will be called switching latch, intermittent contact, adjustable pawl, and selectable ratchet.

In the middle of the machine is placed an auxiliary counter, which scale can be seen around the handle. This counter is destined to count the revolutions of the handle.

The tens carry mechanism (see the nearby figure) is made as follows:
On the same axes, on which are fixed the stop-wheels G, M, I…, are fixed also 10-teeth wheels O, P, Q… Between them are placed intermediate wheels K, L, M… Each intermediate wheel has attached a finger, fixed with a spring (d, e, g, j…), and in odd-numbered wheels, this finger is placed over the wheel of units, while in even-numbered wheels this finger is placed below it. In one revolution of the units-wheel Q the finger de will rotate to 1/10 revolution the wheel of the tens P, and thus the tens carry will be performed. The tens carry from the other wheels will be performed in much the same manner.

The Calculating Drum of Jacob Leupold

In the Theatrum arithmetico-geometricum of Leupold is described also a calculating tool, the so-called Rechenscheiben (calculating drum), based on Napier’s rods (see the lower figure). Let’s examine its construction. 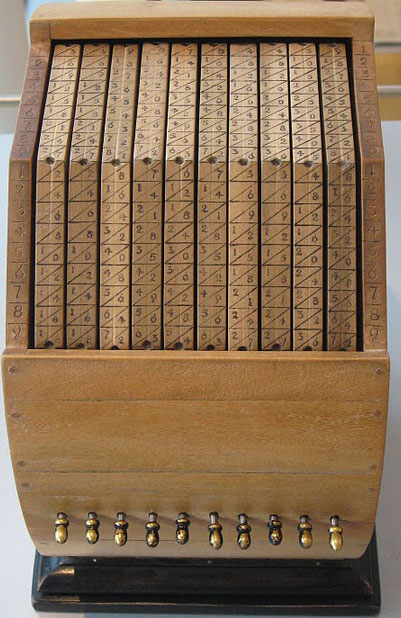 The Rechenscheiben (calculating drum) of Leupold (in the nearby image you can see a later replica of die Rechenscheiben, from the exposition of Arithmeum Museum, Bonn) consists of 11 ten-sided disks, mounted on common axes (marked with F in the drawing). The cylindrical housing is broken through so that only two levels of the number series (two sides of the disks) are visible.

The right side disk is fixed, while the remaining ten disks can be rotated with a hand. On the surface of the device are placed 10 round openings (marked with d), which are used for fixing the angular position of the disks, by means of pins (c), pushed in the appropriate opening, as it is shown on the right side of the figure. On the surface of each of the 10 sides of the rotating disk are inscribed the digits of the same Napier’s rod, while on the side of the fixed disk, with face to the operator, is inscribed a column of digits from 1 to 9. The multiplicand is entered by rotating the proper disks and fixing them by means of the pins against the fixed column of digits (multiplicands) of the fixed disk.

Leupold also mentioned another variant of the device. The modification consists of replacing the disks with rings the width of a number strip. The rings are pushed onto a wooden cylinder and can be adjusted independently of each other.

Jacob Leupold was born on 22 July 1674, in Planitz, a village near Zwickau (then in Electorate of Saxony), to George Leupold (1647-1707), a skilled mechanic (cabinet-maker, turner, sculptor, and watchmaker) from Johanngeorgenstadt (Erzgebirge), and Magdalena Leupold.

Since early childhood Jacob scrutinized his father’s work, developing an interest in various mechanical things and as he described it later, …I had not only opportunity of seeing how different things have been made, but also manual work made me strong. Due to his “ailing physical condition,” it did not seem advisable to let the young Leupold learn a trade, so George Leupold sent him to Zwickau’s Latin school. In 1693 Leupold started to study theology at the University of Jena, but he did not give up his interest in mechanical things—he also attended lectures of the well-known astronomer and mathematician Erhard Weigel. In 1694 Jacob left Jena, since he obviously could not afford the registration fee, and switched to the University of Wittenberg, but soon left it for the same reason—lack of money.

Finally, in 1696 Jacob was enrolled for free at the University of Leipzig, where he apprenticed to an instrument maker and in 1698 he started to produce globes, quadrants, sundials, and measuring and drawing instruments. He was so successful that he broke off his studies for setting up a mechanical workshop. He was helping to design and build many instruments needed for experimental physics studies and his interests had fully changed from theology to mechanics and mathematics.

In 1701 Leupold got a position as a hospital warden in George Military Hospital, thus obtaining not only regular income but also enough free time to dedicate himself to mechanics. In the same 1701, he married Anna Elisabeth, and they had three sons and three daughters, who all died young except for one daughter. Unfortunately, Anna Elisabeth also died young in March 1713.

In 1704 Leupold became ill from an unknown illness, possibly a stroke, which affected his memory and hearing. In his discussions on the capacity of humans for labor, he notes that he was able to lift and move far more weight before his illness.

In 1714 Leupold resigned from the hospital and managed his instrument shop with several assistants. The shop produced both musical and scientific instruments. During this time, he was associated with the University of Leipzig as a mechanic.

In 1715 Leupold was appointed a member of the Berlin Academy of Sciences. This position quickly attracted two other plum appointments: Commissioner of Mines to Saxony and Counselor of Commerce to Prussia.

Leupold is also credited as an early inventor of air pumps. He designed his first pump in 1705, and in 1707 he published the book Antlia pneumatica illustrata. In 1711 following the advice of its president Wilhelm Leibniz, the Prussian Academy of Sciences acquired Leupold’s pump.

In 1720 Leupold started to work on the manuscript of his famous encyclopedia Theatrium machinarum, a nine-volume series on machine design and technology, published between 1724 and 1739. It was the first systematic analysis of mechanical engineering in the world. Leupold’s intended audience was not highly educated elites, but rather the common mechanic, that’s why the book is written in German, not in Latin (the dominant language of science and the universal means of communication in Western Europe up to the end of 17th century). His work is addressed …not to the learned and experienced mathematicians who are already, or should be, better acquainted with them… [and most of whom] have studied mechanics more as a subject of curiosity and a hobby, than with any view of service to the public. The people we had in mind were rather the mechanic, handicraftsman, and the like, who, without education or knowledge of foreign languages have no access to many sources of information…

In the 1720s Leupold rejected several offers by the Russian tsar Peter the Great to move to St. Petersburg.

At the beginning of January 1727, when the eighth volume of the Theatrum Machinarum is nearing completion, Leupold fall gravely ill and died on 12 January 1727, at the age of only 52.