In the middle 1870s, the French engineer Henry Pottin patented the first key-set crank-operated machine and made the first attempt to record the items in addition. The invention of Pottin implemented two of the prime principles of the first workable recording adders; one is the depressable key-set feature and the other is the recording of the numerical items. The machine of Pottin was the first known depressable key-set crank-operated machine made to add columns of figures and one of the first machines in which an attempt was made to print the numerical items as they were added (after Müller, Babbage, and Barbour).

The French inventor Henry Pottin was a holder of more than 20 patents in the USA, Canada, France, Great Britain, Austria, Switzerland, and Germany from 1875 until 1911, mainly for cash registers and other recording and registering machines, but also for other devices like: a billiard table (US patent No. 175495 from 1875), which was prized on Philadelphia Centennial International Exposition 1876, weighing-machine, vending machine, etc.

Almost nothing is known about Henry Pottin. From the patent applications is clear, that he was a civil engineer, and spent most of his life in Paris, France. In his first patent from 1875, he was specified as living in Philadelphia, Pennsylvania. In the other patents, he was specified as a French citizen and resident of Paris. There was a good French history and genre painter, portraitist, engraver, and lithographer known as Henry Pottin, born Louis Aimé Henri Pottin (1820-1864), with a proper age to be his father (or uncle?).

There are four large wheels shown, marked B. These wheels are what may be called the type-wheels, although they also serve as indicator wheels for registering cash sales. The type figures are formed by a series of needles fixed on the face of the wheels.

The means employed for presenting the proper type figure for printing and likewise the indicator figures to indicate the amount set up in each denominational order was as follows:

Referring to Fig. 1, it will be noted that to each type-wheel is geared a spring-actuated segmental rack marked D, which, as shown in the drawing, is in contact with a pin marked i, which protrudes from the side of the depressed number (9) key. 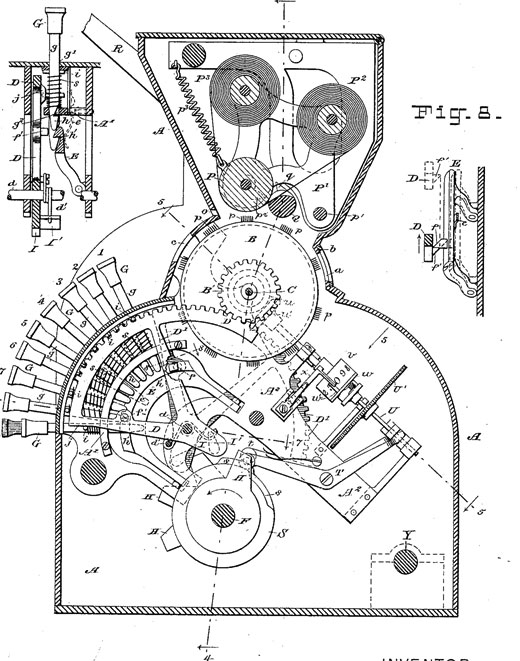 The normal position of the rack D is indicated in dotted lines showing the next higher sector which has not been displaced by key depression.

The means provided for holding the segmental racks D, at normal, also serves to hold a key of the same order depressed, and consists of a pivoted spring-pressed latch-frame marked E (see Figs. 7 and 8).

With such a combination, the depression of keys in the several orders will unlatch the segmental racks, and the racks, through the tension of their actuating springs, will turn the wheels and present a type corresponding to the numerical value of each key depressed.

A hand lever, marked R, located on the left side of the machine provides power for printing the items. Another hand lever, marked J, serves to restore the segmental racks, type-wheels, and the keys to normal, and through the cooperation of the lever R, adds the items to the totalizer numeral wheels, which are shown in Fig. 1 as the numbered wheels marked v.

The paper is supplied from a roll mounted on a hinged platen frame P1 supported in its normal position by a spring P3. The paper passes under the roller P, which acts as a platen for the impression of the type. A shaft Q, passing under the frame P1 is fast and rigidly connected on the left-hand side of the machine with the hand lever R, and acts as a pivot for the said lever and by means of lateral projections q, serves when the lever R is operated to engage the frame P1 and depresses it until the needle types have pricked the numerical items through the paper.

A slit in the casing provided means for printing the item on a separate piece of paper or bill. 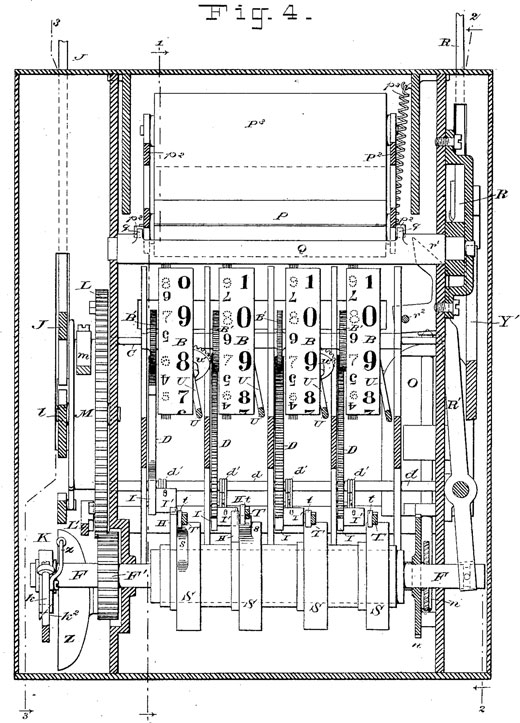 Although there is no means shown by which the paper is fed after an item is printed, it is claimed in the specification that the well-known means for such feeding may be employed. The actuating lever J referred to, is connected by a ratchet and geared action with the shaft F*, so that a revolution is given the said shaft each time the lever is operated.

To the shaft F, (see Fig. 1) is attached a series of arms H, one for each order, which, as the shaft revolves in the direction of the arrow, engages a lug marked I, on the segmental racks D, thus rocking the segments back to normal, turning the type wheels with them.