Smallness of mind is the cause of stubbornness, and we do not credit readily what is beyond our view.
Francois de la Rochefoucauld

In 1735 Christian Ludwig Gersten (1701-1762), a professor of mathematics at the University of Gießen, traveled to London, to be elected a fellow of the Royal Society and to present to the Society his project of an arithmetical machine. In his description, he claims, that the machine has been designed 12 or 13 years before, most probably in 1722.

The machine was described in the scientific journal Philosophical Transactions of the Royal Society Nr. 438 for the months of July, August, and September 1735 (pages 79–97). In his 19-page detailed presentation, named Description and Use of an Arithmetical Machine… (see description of the machine of Gersten) Gersten mentioned, that he has been acquainted with the machines of Morland, Leibniz, Poleni, and Leupold, and learned that Charles Pascal invented one, and was inspired from them (especially from Leibniz) to create his own calculating device.

The first prototype of the machine was wooden, and after the device has been shewed to some Patrons and Friends of Gersten, they encouraged him to continue the development. The second copy was made from brass and at the end of 1725, Gersten presented it to the Landgrave of Hessen Darmstadt Ludwig V and his son, Prince Georg II (who became Landgrave in 1726). The Landgrave admired the inventor and encouraged him to try to popularize it. Besides the presentation to the English Royal Society, the description of the machine was sent and approved by French Academie Royale des Sciences and in 1735 the description was published in the first book of six volume set of Jean Gaffin Gallon—Machines et inventions approuvées par l’Academie Royale des Sciences, depuis son établissment jusqu’a présent; avec leur description.

After 1735 nothing can be found about the machine of Gersten. At the present day exists only a replica of the device from 1920, is preserved in the Braunschweigisches Landesmuseum (see the upper figure).

Let’s examine the arrangement of the machine in the sketch from the presentation to the Royal Society (the nearby figure).

The dimensions of the machine are—36 cm width, 37 cm height, 7 cm thickness. It has six positional input mechanism and seven positional display mechanism (from the design of the machine is evident, that it can be easily extended with additional positional modules). In part 1 of the upper figure are shown the first three digital positions—for units (marked with AA), for tens (marked with BB), and for hundreds (CC). Every position has two sliders, the first of them (the upper one) Gersten named operator, the second one—determinator. The determinator indicates what number will be entered in the calculating mechanism, while the entering is done by moving the operator.

The main element in the calculating mechanism in the machine are ratched-wheels. They are used in the digital dials for entering of numbers, and for tens carry during the calculations.

At the end of his presentation, the inventor acknowledged, that the major constructive problem of the machine is significant friction between the parts of the mechanism, when must be done tens carry for two or more digital positions.

The machine of Gersten is not as elaborate and easy to operate, as the machines of the other early inventors, but nevertheless, it is well-designed and fully capable of calculations device.

Johänn Christian Ludwig Gersten (or Gerstein) was born on 7 February 1701, in Gießen, a town in the German federal state of Hessen. 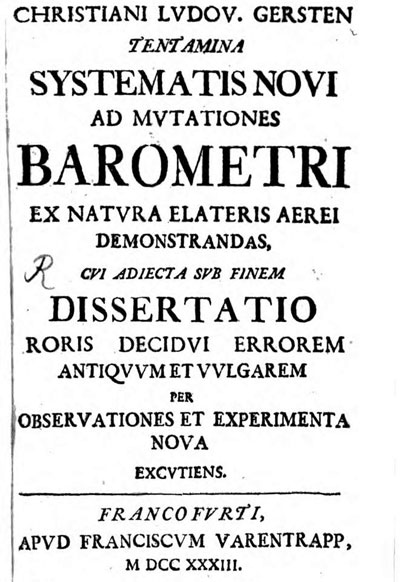 As a scientist, Gersten is primarily known for his dissertation work, published later as a book, describing a series of experiments, using the barometer, titled “Tentamina Systematis Novi ad Mutationes Barometri ex Natura elateris Aerei demonstrandas, cui adjecta sub finem Dissertatio Roris decidui errorem Antiquum et vulgarem per Observationes et Experimenta Nova excutiens” (see the nearby image). Gersten as a matter of fact was the first scientist to find out, based on observations, that dew did not fall from the heavens, but ascends from the earth, especially from plants. He is also the author of several other books in the fields of astronomy, physics, and mathematics.

As we already mentioned, in 1735 Gersten traveled again to London, to present to the Royal Society his project of an arithmetical machine.

It seems Gersten was quite an active person not only in the field of science, but also in public affairs, which later lead him into severe troubles. Gersten was admired in 1725 for his calculating machine by Landgrave of Hesse-Darmstadt Ludwig V, and by his son, Prince Georg II, who became Landgrave in 1726. When in the early 1740s Gersten was deposed from his office afterward for refusing to submit to the sentence of a court of law, in a lawsuit with his brother-in-law Johann Friedrich Wahl (1693–1755), a Professor and from 1735 Rektor der Universität Gießen, in 1744, Gersten wrote a petition to the Landgrave Georg II, which was considered as offensive. The Landgrave accused Gersten and initiated a trial against him. Having a presentiment what will be the result, Gersten decided to escape justice and in July 1744 he left the town.

Initially, he settled in Altona bei Hamburg, and informed the University officials, that he is not going to return to Gießen and lost his position. Then he departed to St. Peterburg, Russia, maybe to some other places also, but finally decided to return to Germany. And then his disrespect to the Landgrave and the attempt to escape from justice finally got him into big trouble. In 1748 he was arrested in Frankfurt am Main by request from Darmstadt, and condemned to lifetime detention at the castle Marxburg bey Braubach (see the lower image).

Gersten never recognized his mistakes, and repeatedly addressed the court with offensive petitions. Interestingly, despite his problems with justice, in 1748 he was partly restored as a professor at the University of Gießen and was allowed during his stay in the castle to teach young people in mathematics. Gersten was eventually released as late as 1760.

Christian Ludwig Gersten died on 13 August 1762, in Frankfurt am Main.