You can easily judge the character of a man by how he treats those who can do nothing for him.
Malcolm Forbes 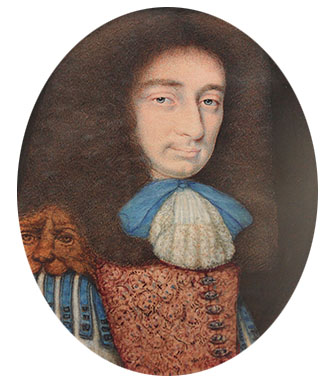 In 1667, Sir Charles Cotterell, an English courtier and translator, suggested a calculating instrument, called Arithmetical Compendium (Instrument for Arithmetick). It was a combination of Napier’s Bones with a bead-type abacus, used to avoid writing down the partial products of multiplication using the rods. In fact, Cotterell’s idea was popularized several years later, circa 1670, when Robert Jole (Jole was a scientific instrument maker, brother in the Clockmakers’ Company, who was active in London between 1664 and 1704), produced his version of the device.

Cotterell most probably knew and was influenced by Samuel Morland, who devised in the 1660s a total of three calculating machines, which were presented to King Charles II and the general audience.

The calculating instrument of Cotterell has a boxwood case (size: 184 mm x 59 mm x 19 mm, weight: 0.13 kg), and was made of brass (binding pieces), glass, iron, engraved paper, and vellum. There is a separate silvered brass tool, for pushing beads and lifting out rods.

The user of Cotterell’s device would slide a window up and down to expose different parts of the times table, reading off the multiplicand on the edge of the instrument frame.

Charles Cotterell (or Cottrell) was born on 7 April 1615 in Wilsford, Lincolnshire, England, and was baptized there two days later. He was the only son (there were four daughters) of Sir Clement Cotterell (1585–1631) and Anne Alleyne (d. 1660, an heiress and daughter of Henry Alleyne of Wilsford), who married in 1606.

Charles Cotterell attended Queens’ College, Cambridge, from 1629 until 1632, but did not take any degree. In June 1632 he began touring Europe with aristocratic friends. Shortly after returning to England in 1634 he was engaged to take the Earl of Pembroke’s sons Charles and Philip Herbert on their travels. Though the tour was marred by the death of Charles, Cotterell entered Pembroke’s service on his return in 1636. Cotterell served the Earl of Pembroke under courtly and military service in the Cavalier army until knighted in Oxford in 1645.

In the early 1640s Cotterell served in the privy chamber troop against the Scots, and his real opportunity for advancement came with the death in July 1641 of the King’s master of the ceremonies, Sir John Finet. Sir Balthasar Gerbier had the reversion to Finet’s place and Cotterell replaced him as assistant master on 30 July. In December 1643 he was promoted to the rank of major and, having fought at Edgehill, at both battles of Newbury, and at Alresford, was knighted in Oxford on 21 March 1645.

In Oxford, Cotterell collaborated with William Aylesbury in translating Davila’s Storia delle guerre civile (published in 1647) from Italian. at the request of the king. In March 1649, after the king’s execution, Cotterell (along with his wife and elder daughter Frances (or Frank), born in 1646, as their infant daughter, Anne, born in 1648, remained in England), accompanied Aylesbury and the Duke of Buckingham into exile in Antwerp.

By 1652 Cotterell had moved to The Hague as steward to Elizabeth Stuart, Queen of Bohemia, while completing a translation of La Calprenède’s Cassandre. After resigning his stewardship in September 1655, Cotterell was appointed an adviser to the Duke of Gloucester, under whom he fought in three campaigns in Flanders.

On 29 May 1660, Cotterell returned with the royal party to London, with his children but without his wife Frances, who died around 1657, and was sworn Master of the Ceremonies on 5 June. The pursuit of a young widow, Anne Owen, led Cotterell to form a friendship with Katherine Phillips, whose husband was the Member of Parliament for Cardigan. Phillips was a young poet known in her salon as Orinda. Cotterell became a major figure in Orinda’s literary circle, and later took Phillips’s seat in Parliament from 1663 until 1678.

Sir Charles Cotterell resigned his seat as Master of the Ceremonies on 27 December 1686, in favor of his son Charles Lodowick. In 1693 he published a translation The Spiritual Year, a Spanish devotional tract.

Cotterell seems to have been well regarded by those who knew him. For example, the diarist and naval administrator Samuel Pepys described him as “ingenious”. The Italian historian and satirist Gregorio Leti lavished praise on him, believing he represented everything that any court in the world could seek in a master of ceremonies, describing him as “of kind disposition, soft and gentle, assiduous in his visits, of wise counsel, exemplary lifestyle, and the best conversation”.

After a sickness of some ten days, Charles Cotterell died at 6 p.m. on 7 June 1701 at his home in St Martin’s Lane, Westminster.