Lee Spear Burridge (1861-1915) and Newman Russell Marshman (1846-1930) of New York were American inventive geniuses and manufacturers, who worked together between 1882 and 1897, and are primarily known as typewriter inventors, but they patented also quite a few calculating devices.

Let’s examine the operation of the second calculating (adding and recording) machine of Lee Burridge and Newman Marshman, using the patent drawing (see the nearby drawing).

The object of the invention is to provide a machine that will print and add figures by the operation of a stylus as exemplified in patents on typewriters granted to the inventors in 1885 (US patents No. 314996 and 315386), this invention being the outgrowth of that, and an adaptation of it modified to serve the purpose for which it is intended.

The operation consists in moving the stylus opposite to the desired numeral on the letter-plate and depressing it, which will cause that numeral to be printed on the platen (marked with 51 on the patent drawing), and the wheel 90 (and whatever wheel (31 it is in mesh with) to rotate that particular number of teeth. When the hand and stylus return, the carriage will take one step to the right, owing to the movement of the spring-clogs 76 with rack 75, and the next depression of stylus will cause a numeral of a higher numerical order to be printed and added.

When the desired number has been printed the arm 15 is drawn down, which will cause the carriage to be returned to the starting point, spring 91 to be rewound, the paper to be advanced to a new line, and arms 67 to be reset, it let off during the rotation of the adding-wheels 61. 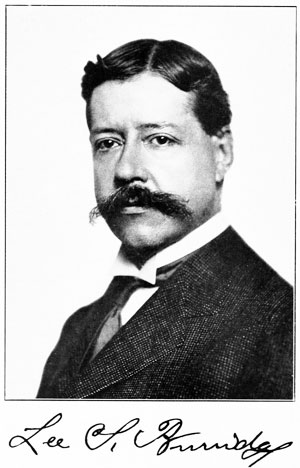 Levi Burridge graduated from high school in his home town Painesville and later studied at the just founded seminary in the nearby town of Madison, Ohio. Then Levi enrolled at the Baltimore College of Dental Surgery to study dentistry and graduated in 1850 as D.D.S. (Doctor of Dental Surgery). A year later, in 1851, Levi received an M.D. at the Baltimore College of Physicians and Surgeons.

After two years of practicing in New York with his uncle Dr. Eleazar Parmly (1797-1874), also a dentist, Levi traveled to Rome, Italy, where he established his headquarters for 17 years. In Rome, in 1854 he met, and next (1855) year he married Emma Frances Ogden (born on 15 February 1821, in Bordeaux, France—died 11 Jan 1881 in New York), a daughter of Samuel Gouverneur Ogden (1779-1860), a wealthy American merchant. They had a daughter, Emma Frances (1856-1880), and two sons, Francis (Frank) Ogden (born in Rome, 5 February 1858—died 25 September 1930) and Lee Spear. Levi practiced mainly in Italy, Austria, and France (he settled in Paris in 1869, took part in Franco-Prussian War as a surgeon, and was awarded), and his patients were many local celebrities like the Rothschild family, Pope Pius IX, the King and Queen of Naples, the Emperor and Empress of Austria. In 1879, Levi settled down and since then has been commuting between Europe and the USA. He died as a result of an accident (falling from his carriage) on 28 November 1887, in Cannes, France, and was interred in Woodlawn Cemetery, New York.

Lee Spear Burridge spent his youth in Europe (he was educated at Tunbridge Wells Grammar School, south-east of London, England) and in 1878 he moved to New York, entering the importing house of Aufmordt & Co. Being of an inventive turn of mind (in 1883 the American Institute granted him an award of merit), he directed his attention to the manufacture of mechanical toys and in 1890 established the Sun Manufacturing Co. to exploit these novelties. Among his toys were a walking man and a creeping doll, which were marvels of ingenuity.

Lee Burridge directed much of his efforts at simplifying the parts and movements of the typewriter, a technological novelty in those days. Some of his innovations over the years were: a new inking system combining a small self-supplying ink roll with a type-bar; a counter-balance type bar, permitting a very slight and delicate touch to the keys; a visible machine; a special type-bar machine operating 78 characters with only 10 keys (however, this odd machine was never produced.

In 1882 Burridge began a long-lasting partnership with another inventor—Newman Marshman. They combined to work on a toy and jointly patented it (US patent No. 296724) in 1883. In 1884 they devised the Sun Index typewriter. In 1885 it was patented (patent No. 315386) and went into production (see the nearby image). In 1887 Lee and his brother Frank incorporated the Sun Typewriter Co. in New York. Lee was president of this company until his death.

After patenting several calculating devices in the early 1890s, in 1896 Marshman and Burridge offered a swinging type shuttle typewriter to the American Typewriter Co., but it failed. Soon after this failure, they went their separate ways.

Lee Burridge is well known to the typewriter industry because of the machine he and Frank launched in 1901, the Sun No. 2. This remarkable machine (see the nearby image) was an early luggable, came in its own case, and was advertised as the only standard typewriter suitable for travelers. It is a small desk machine with an idiosyncratic inking mechanism, that sold quite well from 1901 to 1907.

Sun keyboard machines were fairly successful and quite a few were made, and they were made up until the early 1920s. Lee Burridge never married but did manage to leave behind at least three small Suns, the index model, and the two keyboard models. Moreover, after his death, in 1919, Underwood Co. bought the patents for Burridge’s machine and launched it in November 1919 as the Underwood Standard portable Typewriter.

In 1908 Burridge became interested in aviation and together with some like-minded enthusiasts purchased the first airplane ever sold. He arranged the first public exhibition of flying that was given by Curtiss at Bronx Park. This airplane was sent on an exhibition tour throughout the United States and Canada, solely to foster and create public interest in aviation, and was in a large measure the start of practical aviation in the USA.

Lee Burridge was a remarkable inventor, he applied for and received over sixty patents and constructed nearly seven hundred different models. Moreover, he founded the Aeronautical Society of America and was the president for several years. Burridge was also a member of the Aeronautical Engineers Society, the Automobile Club of America, the National Geographic Society, and the Aero Club.

Lee Spear Burridge died at age 54 at his home on 160 West 54th Street in New York, on 4 May 1915. At the time of his passing his estate was appraised at $91,000. Unmarried, Lee left this small fortune, and his unassigned typewriter patents, to his brother Frank.

Newman Russell Marshman was born on 19 December 1846, in Manhattan, New York. He was the son of an English-born real estate agent, Benjamin Marshman (born 1810), who emigrated to America in the 1830s, and his Pennsylvania-born wife, Rachel Newman Marshman (b. 1812).

In the late 1870s he worked as a professor of music. At that time he devised the orguinette (see the nearby image), a small portable reed organ mechanically played by turning a crank (Marshman got three patents for this device, in 1878, 1882, and in 1884). This type of musical devices have an important place in history as the first affordable instruments for the mass distribution of recorded music. The music was recorded on paper sheets or rolls, cardboard disks, or pinned wooden cylinders. The organettes were made in big quantities and in a great variety of styles, beginning in the late 1870s and continuing until superseded by the gramophone in the early 1900s.

In 1878 Marshman invented a player harmonica (US Patent No. 209492), the music for which was “written” as a series of holes punched in a roll of paper. The player blew into the mouthpiece while turning handles that wind the paper roll through the instrument, determining which notes are to be sounded.

In the early 1880s Marshman continued working in this area, and in 1881 he invented a flute organ, followed by yet another musical instrument in 1883.

In 1882 Marshman began a long-lasting partnership with Lee Burridge, which continued until 1897 when they went their separate ways. In the late 1890s Marshman made three attempts to come up with his own typewriter, and obtained three patents for typewriters, and for an inking ribbon for typewriters, but apparently without success. Later he patented a coal-carrying vessel or bag (1905), a sweat band for hats (1908), etc. In 1910 Marshman returned to his first pursuit, musical instruments inventing, but by 1915, aged 69, he was out of work.

In 1873 Newman Marshman married Josephine Marshman (born Sep. 1853). They had three children, but all of them died in infancy.

Despite being an inventive genius, at the end of his life, Newman Russel Marshman was a penniless servant in the Baptist Home for the Aged in New York City. He died in Bronx, NY, at the age of 83, on 2 November 1930, and was buried in Poughkeepsie Rural Cemetery.