None of us, including me, ever do great things. But we can all do small things, with great love, and together we can do something wonderful.
Mother Teresa 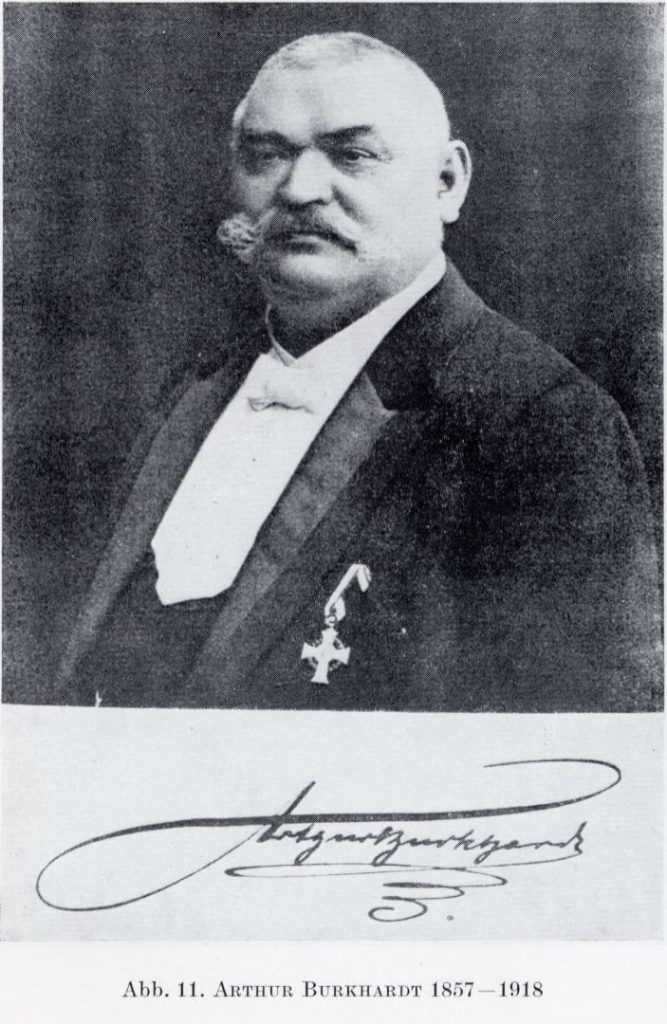 The foundation of the calculating machine industry in Germany, one of the leading industries of its kind for several decades afterward, was laid in the second half of the 1870s by two young German engineers—Kurt Dietzschold (1852-1922) and Arthur Burkhardt (1857–1918), in Glashütte (a small town in Sächsische Schweiz-Osterzgebirge, which is considered as the birthplace of German watchmaking industry).

In 1873 Kurt Dietzschold, then a student in Mechanical Engineering at Technischen Hochschule in Karlsruhe, visited the Vienna World Exhibition, where he saw and was fascinated by Thomas de Colmar calculating machine. Two years later, in 1875, already a mechanical engineer, he decided to create his own calculating machine, with a calculating mechanism based on a relatively new type of mechanism—so-called Schaltwerk mit Schaltklinke (rear derailleur with switching latch, or switching pawl). The switching latch mechanism is described first time by Leupold in 1727, and was later used very successfully in Hamann’s machines.

In 1876 Dietzschold was invited to come to Glashütte, and to work for the newly founded company Strasser & Rohde, a workshop for the construction of computing machinery, precision equipment, and pendulum clocks (later Dietzschold became a co-owner and head of the company). In Glashütte Dietzschold continued his work on the calculating machine, and by 1877 he managed to produce three copies of his machine and gave up one of them to the Royal Prussian Statistical Office for testing. However, the statistical office found that the machine did not operate to their full satisfaction. That’s why Dietzschold asked for help from another engineer and one of his most gifted university schoolmates from Karlsruhe—Gotthilf Robert Arthur Burkhardt, who was then serving his time in the army.

Arthur Burkhardt came to Glashütte in October 1878, but the next year 1879 his friend Kurt Dietzschold decided to accept the proposal to become a director of Österreichischen Uhrmacherschule in Karlstein, and left the town. In the same year, Burkhardt founded the first specialized factory for calculating machines in Germany—Glashütter Rechenmaschinenfabrik Arthur Burkhardt and thus laid the foundation for the calculating machine industry in Germany.

Burkhardt decided to abandon the design of Dietzschold and returned to the classical stepped-drum system of Leibniz and Thomas de Colmar, changing the setting and transfer system of the machine to the stepped-drum system. The production of the first model of the machine (so-called Model A) was started in 1880 (see the photo below), but in small numbers. The real serial production of the Burkhardt arithmometer did not start until around 1885, because there was hardly any demand in Germany until then. 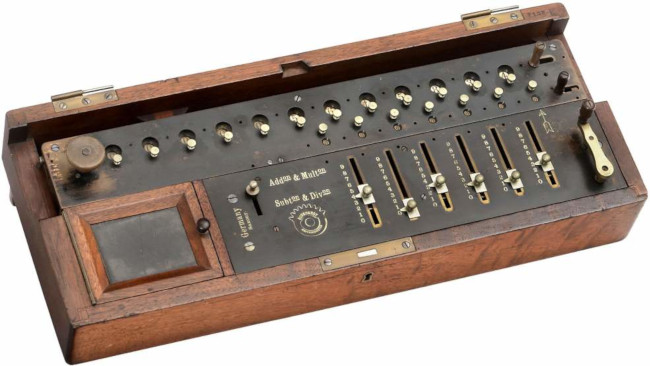 Burkhardt’s Model A calculating machine (Serial Nr. 7137, from the end of 1890s)The Burkhardt Arithmometer (sometimes known as a Glashütte machine because of where it was made) has overall measurements: 10.5 cm x 52 cm x 21 cm, and weight about 10 kg. It has a brass top plate painted black and brass and steel mechanism that both fit snugly in a wooden case. Six (or eight) German silver levers move to set numbers. The operating crank is to the right of the levers, and an addition & multiplication / subtraction & division lever is to their left. The operating crank folds down so that the lid closes. At the far left is a compartment with a slate cover.

Behind the levers is a carriage with an 8(9)-window revolution register and a 14(16)-window result register. Both registers have thumbscrews for setting numbers. Each window of the revolution register shows the digits from 0 to 9 in black, and from 1 to 8 in red. A bell sounds when the crank has been turned too often in subtraction and a negative number results. It is intended especially for use in division. A knob on the right side of the machine clears the revolution register, and another knob on the left side clears the result register. When these knobs are in use, brass bars extend out the sides of the carriage. Holes for decimal markers are between the levers and between the windows of the registers, but the machine has no decimal markers.

A piece of wood hinged to the back of the case of the machine can be released so that the instrument slopes toward the operator. A panel in the bottom of the case slides across to reveal the brass stepped drums.

A number of machines were produced for government authorities, insurance companies, and the like, but the demand for such machines was still so insignificant, that Burkhardt had to turn to the manufacture of other articles and, in fact, had to leave Glashütte for Braunschweig for several years (during which time he was active in an entirely different line—construction of a complex harp). He returned to Glashütte in 1885 and again devoted his time to the manufacture of calculating machines. In 1892 the number of sold machines of Burkhardt reached 500.

In 1895 Burkhardt made successful business cooperation with Hugo Bunzel (1852-1908), a painter and businessman from Prague. Bunzel not only sell Burkhardt’s machines, but also launched his own version of the device under the name Bunzel Rechenmaschine.

In 1909 the wooden box was replaced by a cast iron casing and Model D and Model G were released (see the nearby photo).

In 1913 were released three new models—K, C, E (see the photo of Model E below), which remained in production until the end of the 1920s.

Burkhardt is generally regarded as the founder of the calculating machine industry in Germany, and in the course of years, he managed to keep improving his product (but he never patented it, although Hugo Bunzel took out three patents in Austria-Hungary and Germany). The Burkhardt Arithmometer obtained front places and medals on national, international and world fairs and was produced up to 1929, when the factory in Glashütte was closed (In 1920, not long after Burkhardt’s death, his firm merged with a company in the same city to form Vereinigte Glashütter). The later successful calculating machines Saxonia and Archimedes were based on the construction of the Burkhardt Arithmometer.

Gotthilf Robert Arthur Burkhardt was born on 24 January 1857, in Apolda, a town in central Thuringia, Germany.

As a boy, Burkhardt was encouraged by his father to work on warp knitting machines and was proficient in this subject. In the middle 1870s he studied mechanical engineering at the University of Karlsruhe, where he met his elder fellow student Kurt Dietzschold. In 1878, after completing his military service, Burkhardt was invited by Dietzschold to come to Glashütte and to work together with him on improving the computing machine developed by Dietzschold. When Dietzschold followed the call to head the Karlstein Watchmaking School in Austria in 1879, Arthur Burkhardt stayed in Glashütte to continue working on the project.

Burkhardt temporarily stopped working on his computing machine in 1883 and moved to Braunschweig. In the newly created Society for the Construction of Double Pedal Harps, he was responsible for the drive mechanism and mechanics.

Burkhardt served the municipality as a city council for several years. From 1890 to 1896 he was a member of the supervisory board of the German watchmaking school in Glashütte. He was a member of the Association of German Engineers, the German Museum in Munich, the Professional Association for Precision Mechanics, and the German Society for Mechanics and Optics. He was awarded the First Class Knight’s Cross of the Royal Saxon Order of Albrecht. The Burkhardt Arithmometer achieved top places and medals at national, international, and world exhibitions.

From 1909 the son of Burkhardt, the engineer Erich Burkhardt joined the company management. After the death of his father in 1918, he became the new owner.

Arthur Burkhardt died on 21 July 1918, at the age of 61, and was buried in the Glashütte cemetery.