After the first two machines, representing the class of direct-multiplying machines of Edmund Barbour and Ramon Verea, which remained relatively unknown, appeared a third one, which had a much better destiny—machine à multiplier (multiplying machine) of León Bollée of Le Mans, France, which won a gold medal at the 1889 Paris Exposition.

Most early calculating machines carried out multiplication as a form of repeated addition. To multiply, say, by sixteen, one set the carriage at its rightmost position, turned the operating crank six times, shifted the carriage one position to the left, and turned the crank once (eight operations). In direct-multiplying calculating machines, the operator had only to perform n operations when the multiplier was an n digit number (i.e. the above-mentioned multiplication will need only two movements).

Tableau multiplicateur-diviseur (Tables for multiplication-division) (see the image below) is a simple table-based instrument for manual multiplication, division, and square root.

Petit appareil multiplicateur (Small Multiplicator) is a simple calculating device (see the image below), based on a set of cylindrical Napier’s bones, similar to Nouvelle machine d’arithmétique of René Grillet de Roven.

The Arithmographe of Bollée is a mechanical calculating tool for multiplication and division, which used rulers of Genaille-Lucas, arranged in sheets (see the photo below). Dimensions: 31 x 28,5 x 2,6 cm; Weight: 3.5 kg. This instrument combines a slide adder mechanically connected with a series of overlapping multiplication rods. Partial results (of multiplication) are not given in form of digits, like on Napier’s bones, but by the positions of adding wings (coulisses d’addition).

The latest (as a time of creation) calculating device of Bollée—the Compteur (Small Adding Machine), was an interesting adding device (see the image below), based on phone dials, which remained relatively unknown. The input dials (marked C and D in the lower drawing) can be rotated separately or simultaneously until reaching the stoppers (F and E). The result of the calculation can be read on the table G placed on the left, using the moving tip H, resting on lever 1.

The biggest and most complex of Bollée’s calculating devices—the Multiplier,  was actually the first successful direct-multiplying calculator and it became quite popular, after it won a gold medal at the 1889 Paris Exposition. Two of devices (Multiplying Machine and Arithmographe) were patented in France (1889, No FR201033), Belgium, Germany (DE88936 and DE82963), Austria-Hungary, Great Britain (GB16677), and the USA (patent No 556720 from 1896) (see the figure below).

The Multiplier of Bollée (see its presentation in the Manufacturer and Builder magazine of July 1890) was a large (overall size: 45.5 cm x 104 cm x 38 cm) manually operated non-printing direct multiplication calculating machine, which has an iron base with a brass and steel mechanism and an open framework.

The main advantage of all direct-multiplying machines over the other calculating machines of this time, is the speed of calculations. In 1892, during a demonstration, Bollée calculated automatically the square root of an 18-digit number in about 30 seconds, a remarkable speed for this time. Similar calculations with another machine would require at least five minutes.

The idea, used in the multiplying calculating machine of Bollée is to use special bars with attached pins of different lengths, to be created something like a mechanical representation of Napier’s bones. The different possible products are presented by means of two plates: the first is for units (see the lower sketch), second is for tens. The height of the pins is proportional to the digit, which is in this particular position of the product.

A metal box carrying 12 setting levers moves along a bar near the front of the machine. In front of it are a multiplier knob and brass disc with 20 teeth. The spaces between the teeth are labeled from 0 to 9 and from 0 to 9 again around the edge. Rotating the multiplier knob moves the metal box, placing it in one of the spaces between the teeth of the disc sets the digit of the multiplier.

The bar with pins is shifted in such a manner, that during the transfer of the number from the setting mechanism to the calculating mechanism the pins will come into contact with gear-strips and will move them to a different distance, according to the height of the particular pin. So the wheels of the counter, which will be engaged to these gear-strips will be rotated to the different angles and thus the right digit will be transferred. So all the multiplication will be done with one movement of the calculating mechanism, not by consecutive addition or subtraction, as in other used for multiplication and division machines.

On the right side is a lever that may be set at either + or -. Toward the front is a set of 21 cylindrical dials, visible through windows. Each dial shows two digits at any one time. The top row of digits is labeled MULTN and used to show the multiplier in multiplication. The lower row of digits is labeled QUOTT and shows the quotient in division. Above this row of cylinders is a row of 21 dials which shows the result in multiplication and is set with thumbscrews with the divisor in division. 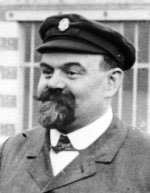 Bollée family were well known in France bell founders (working in this trade since 1715). A native of Lorraine, the grandfather of León Bollée—Ernest-Sylvain Bollee (1814-1891) has long toured France to melt bells and chimes before settling in Le Mans in 1842. Ernest-Sylvain became seriously ill in the 1860s and was forced to delegate the running of his businesses to his three sons.

The eldest son and father of León Bollée—Amédée-Ernest Bollée (see the nearby photo) was given charge of the bell foundry, while Ernest-Jules (1846–1922) supervised the hydraulic ram business and the youngest son, Auguste-Sylvain Bollée (1847–1906) assumed control of the Éolienne Bollée wind-turbine factory.

However, in the early 1870s, Amédée-Ernest decided to switch to a recently established trade and became the pioneer of the automobile industry in France. Amédée Bollée produced several steam cars since 1873, including the pioneering L’Obeissante (the Obedient), which made the first road trip between Le Mans and Paris (some 500 km) in 18 hours, and the Mancelle from 1878, which is regarded as the first automobile to be put into series production. It is not a surprise, that later not only León, but also his elder brother Amédée-Ernest-Marie became automobile manufacturers, while the youngest brother, Camille, became an amateur inventor, auto-racer, and photographer.

León Bollée was an energetic and restless man, and he proved his genius in engineering in the first blush of his youth. In 1884, only 14 years old, he constructed a pedal vehicle (velocipede nautique). In 1887 the young Léon began work on several calculating machines. Especially the biggest one—Direct Multiplier, which won a gold medal at the Paris Exposition of 1889, was a remarkable and very advanced calculating device, a real masterpiece of engineering. The American most famous inventor Thomas Alva Edison proposed to hire Bollée in the United States, but he declined the offer.

León Bollée was the first in France to build small gasoline-powered vehicles, beginning to do so in 1895. In 1896, he introduced a vehicle with three wheels, so-called Voiturette (see the image below). At the time, these diminutive tandem two-seaters were the fastest things on the road, winning a variety of French road races at speeds of up to 45 km/h. In 1897 the Voiturette reached a top speed of almost 100 km/h. The single-cylinder 3 HP 650cc engine was designed by his brother Amédée. The Voiturette was the first automobile equipped with rubber tires. The cars sold well and several hundred were made for Léon Bollée by Hurtu & Diligeon. Encouraged by this initial success, he founded his business at Le Mans, the Léon Bollée Automobiles.

The next vehicle of Bollée (a four-wheel car) appeared in 1899. In 1903 Bollée produced his first big car. Renowned for its quality, the brand has instant success. Bollée built two 4-cylinder models, a 28-hp 4.6-liter and one 45 hp 8-liter engine, followed in 1910 by a 10-liter model. By 1911 his production facility manufactured 600 vehicles per year, quite a big number for the time.

León Bollée was also interested in aviation and aeronautics, taking a lively interest in the dirigible balloon inventions of several French inventors. In 1908 he invited the Wright brothers, the inventors of the world’s first successful airplane, at Le Mans on the occasion of their visit to France. Thanks to him, Wilbur Wright succeeded in finding common ground to steal his Flyer III A, the racetrack of Hunaudières near the current racing circuit of Le Mans, then at the military camp of Auvours between June 1908 and January 1909.

Léon Bollée was a holder of France’s Legion d’Honneur.

Léon Bollée was married to Carlotta Bollée (née Messinisi) (born 1880 in Vastizza, a rural area near Patras on the Gulf of Corinth, Greece), and they had a daughter—Élisabeth Bollée (born 9 August, 1908). Élisabeth was a poet, she married Count Jean Maurice Gilbert de Vautibault in 1927, and later divorced de Vautibault to marry the American painter Julien Binford. She died on 11 July 1984.

In August 1911 Léon Bollée was injured in a flying accident and never fully recovered. As he also had a pre-existing heart problem and was overweight, he died of a heart attack in Paris on 16 December 1913, aged only 43, and was buried in Holy Cross cemetery on the heights of Le Mans. Today there is an avenue Léon-Bollée in Paris, and an avenue, monument, and stadium in Le Mans, named in his honor.