There are worse things in life than death. Have you ever spent an evening with an insurance salesman?
Woody Allen

In the 1860s, Elizur Wright, an American mathematician, journalist, and abolitionist (living at the time in Medford, Massachusetts), sometimes described as the father of life insurance in the United States, invented a calculator, called Arithmeter (it was a large cylindrical slide rule, an equivalent of a linear slide rule some 20 meters long). He patented it in 1869 (US patent Nr. 93849), and sold it to insurance companies for $500. Wright also used the Arithmeter in his successful business for calculating the value of insurance policies, which he set up together with his youngest son Walter Channing.

Joseph Warren Fowle (1823-1880), a Boston machinist and inventor (holder of quite a few patents for various devices), is known to have built several arithmeters for Wright. At least ten machines survived to our time, one of them in the collection of the National Museum of American History in Washington, D.C. (see the image below).

The machine consists of two rotary adjacent cylindrical brass drums, each covered with paper and mounted horizontally in a round brass frame, which is screwed to the round wooden base. Two indentations in the side of the base assist with lifting the instrument. A crossbar attached to the frame extends across the length of the drums. Two arms (indicators) slide across a groove in the bar. A brass handle with an ivory knob on the right side of the frame rotates the drums. An ivory button on the left side of the frame operates a brake-shoe. When the button is locked in a vertical position, the two cylinders turn together. When the button is horizontal, only the right cylinder turns.

The two drums are marked identically. Each drum has a spiral of 20 turns around the cylindrical surface, divided according to the logarithmic scale upon spiral or helical lines, with printed numbers to the right of each division. The first digit of a number is read from the crossbar, and the remaining three are printed on the drum. The markings include every digit from 0 to 3000; every even digit from 3000 to 6000; and every other even digit from 6000 to 10000. 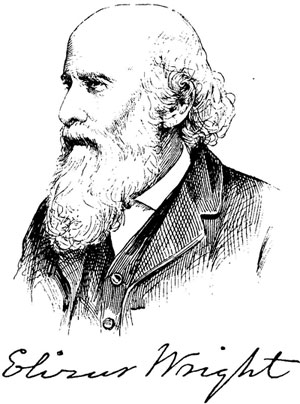 Elizur Wright III (his father and grandfather were also named Elizur Wright) was born on 12 February 1804, in South Canaan, Litchfield County, Connecticut, USA. He was the first child of the moderately prosperous and typical New England Yankees with strong Calvinistic background Elizur Wright (1762-1845) and his second wife Clarissa (Richards) Wright (1771-1843). Elizur Wright-father already had six children from his first marriage and will have four more children after Elizur (Clarissa, b. 1805; Martha, b. 1807; Lucy Mix, b. 1811; James Richards (1814-1897)).

Elizur Wright-father was a son of Elizur Wright (1718-1787), a sea captain and farmer in Canaan, Connecticut. He was a mathematician and Phi Beta Kappa Graduate from Yale, in 1781.

In the spring of 1810, the family moved from Canaan to Tallmage, Ohio, making the journey in a two-horse carriage with an ox-team to transport their household goods. Their progress was necessarily slow, and it was nearly six weeks before they reached Talmage, as it was generally necessary to camp at night by the way-side. This romantic journey, the building of their log-cabin, the clearing of the forest, and above all his solitary watches in the maple-orchard (where he might perhaps be attacked by wolves), made a deep poetic impression on young Elizur, and furnished him with a store of pleasant memories in the afterlife.

In Tallmadge Elizur Wright-father became a founder and teacher of the first Tallmadge High School in 1815, and later founded the Western Reserve College in 1826. He was a deacon of the Congregational Church and an abolitionist leader. Wright-father was also a major landowner and developer of coal.

After studying in the local primary school, the young Elizur Wright III entered Yale College in 1822. He helped to support himself during his college course not only by teaching in winter, but by making fires, waiting at tables, and ringing the recitation bell. In spite of these menial services, he was popular in his class and had a number of aristocratic friends. He was one of the best scholars in his class, first in mathematics, and so fluent in Greek that to the end of his life he could read it with ease.

Ill health came next in turn, a natural consequence of his severe life at Yale College. Wright was obliged to leave his school, and for an occupation, he circulated tracts for the American Congregational Society. Late in 1829, Wright moved with his young wife to Hudson, Ohio, to accept an appointment as a professor of mathematics and natural philosophy at Western Reserve College. There he remained till 1833, strengthening himself in the repose of matrimony for the conflict that lay before him.

In December of 1833, the first national anti-slavery convention met in Philadelphia, and Elizur Wright was unanimously chosen secretary of it. After that he went to New York to edit a newspaper, the Anti-Slavery Reporter, remaining there until 1839.

In 1846, Elizur Wright established a newspaper, the Chronotype, in opposition to the Government policy, which he conducted until it was absorbed by the Commonwealth (1850), of which also he was for a time the editor.

Between 1853 and 1858, besides editing the newspaper Railroad Times, Elizur Wright gave his attention to invention and mechanics, constructing a spike-making machine, a water faucet (stop-cock), and an improvement in pipe coupling. He patented the last two (US patent Nr. 10082 and US patent Nr. 18116) and manufactured them for a short time. Later in the 1860s Wright devised and patented the abovementioned Arithmeter, a form of a cylindrical slide rule.

In 1852 an insurance broker placed an advertising booklet in his hand. Elizur Wright looked it over and perceived quickly enough that no company could undertake to do what this one pretended to and remain solvent. The booklet served him as an editorial, and he embarked on a successful crusade to reform the insurance industry. In 1853, Wright published his volume “Life Insurance Valuation Tables”.

Elizur Wright campaigned for valuation laws requiring life insurance companies to hold sufficient reserves to guarantee that benefits would be paid, and nonforfeiture laws requiring the companies to provide surrender values. He devised a new formula for finding the values of policies of various terms, known as the accumulation formula, and served as state commissioner of insurance for Massachusetts, from 1858 to 1866. In 1873, Wright also published another volume entitled The Politics and Mysteries of Life Insurance. In addition to his inventions and writing, he became a consulting actuary for various life-insurance companies in the Commonwealth.

Elizur Wright died of paralysis on 21 November 1885, in the midst of a rainstorm that lasted six days and nights in Medford. He lies interred at Mt. Hope Cemetery, Massachusetts.