Statistics is the grammar of science.
Karl Pearson

The prominent US statistician, romance novelist and amateur engineer Charles Felton Pidgin (1844-1923) from Boston, Mass., was a holder of quite a few patents (at least ten) for various devices, like indicator, apparatus for compiling statistic (Pidgin’s system for census, the so called “chip” system, in late 1880s was the main rival of the tabulating system of Hollerith), calculating mechanism for typewriter (pat. No. 1044597), motion picture (a very funny idea for adding word balloons to movies by having the actors blow into inflatable tubes that had the words on them), and others, between them two patents for electro-magnetic calculating machines (US284755 and US735291).

To illustrate the mode of operation and manipulation of the machine of Pidgin, let’s refer to the first patent drawing.

In the operation of the machine, to indicate the number “1” on any of the indicators, the circuit-closer h of that indicator is drawn forward to make contact with the first spring, k, and the result appears by the presentation of the figure “1” at the corresponding aperture. If the indicator be the first one, the figures “1” will simply indicate unit 1; if the second, 10; if the third, 100; the fourth, 1000, and so on. When the circuit-closer h is drawn forward to make contact with the first spring, k, the battery-circuit is closed through battery post or screw 0, wire I, plate i, spring l, and screw m of circuit-closer h, contact-spring k, (and supposing we are operating the unit-slide,) wire 3, magnet-coil M, wire 6, common return-wire 11, and terminal o’, thence to the other battery-pole or ground wire. The electromagnet M is thus vitalized and attracts the armature-arm f, causing the escapement to rotate the ratchet-wheel e one space, the dial j of course rotating with it and showing the figure “1” at the opening t of the casing. Every time the circuit-closer h touches a spring, k, an electrical impulse is sent through the electromagnet and the dial j advances, as described.

To further illustrate the manipulation, let’s refer to Fig. 6. We have already described how one number is indicated on the dial j. Let it be supposed that we wish to add 29 to 33, the operation is as follows: To add 29 to 33, the unit-dial indicating “3” and the tens-dial indicating “3”, to add the “9” to the three units, pull the unit-key down to the point numbered 9 and push it back, making the contacts going down and four going back. The unit-dial will then indicate “2” and on the tens-dial “1”; ten will be carried to the “3”, changing it to four tens. To add the two tens, pull the tens-key to 2 and return, making one contact going and one returning. The tens-dial will then indicate “6” and the units-dial “2”, reading from left to right “62”, which is the sum of the two numbers 33 and 29. The machine will of course always show the sum of all numbers registered subsequent to the time it was last set at zero; and any number may be registered from 1 to 990000000, the simple registering of an additional number or numbers immediately changing the reading on the dials to the sum of the number previously registered and the amount added by the last operation.

The machine has an automatic electric carrying device, whereby the figures of one arithmetical denomination are automatically carried to the next, if tens carry should be done. 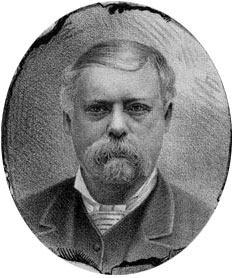 Charles Felton Pidgin was born on 11 November 1844, in a house in Felton place at Boston Highlands, Roxbury, Massachusetts, to Mary Elizabeth (Felton) Pidgin and Benjamin Gordon Pidgin (1820-1882). Charles had two younger sisters—Mary Felton (b. 1848) and Nancy, who died young. Benjamin Pidgin was a varnisher, while Mary Elizabeth (born in Roxbury in Jan. 1824 to Joshua Felton (1787-1835) and Hephsibah Skinner (1786-1854), eight generation descendant of Lieutenant Nathaniel Felton, who came to Salem, Mass., from Great Yarmouth, England, in 1633), as it was a general rule at the time, was keeping house.

As a young child, Pidgin was rendered lame by an accident to his hip, and he was also partially blind for a number of years, but he remained a unremitting worker for the rest of his life. After graduating from the English High School in Boston (one of the first public high schools in America, see the image below) in 1863, he worked for ten years as an accountant in mercantile business.

In 1873 Pidgin was appointed as a chief clerk of the Massachusetts Bureau of Labor Statistics and remained connected with the Bureau for over thirty-four years. In addition to performing his administrative duties as an official of the Bureau, he contributed much statistical material for publication in the Bureau’s reports and labor bulletins, and in 1888 he published, independently, a book entitled Practical Statistics. He was appointed Chief of the Bureau in 1903, and remained there until 1907, leaving to focus on his writing work.

As we already mentioned, Charles Pidgin invented numerous devices and machines for the mechanical tabulation of statistical data, some of which were patented, and two advanced calculating machines. Pidgin developed also a system for census (in his so called “chip” system, data from the schedules were transcribed to colored cards, and the cards were counted by hand), which in late 1880s was the main rival of the tabulating system of Hollerith.

I find it fun that besides the elaborated machines, in 1917, Pidgin patented a very ludicrous idea (patent No. US1240774A)—to display dialogue in silent films, as actors inflate balloons or party favor-like objects with text on them, in order to recreate the act of speaking. He even improved his funny idea, obtaining another patent in 1919 (patent No. 1317725). 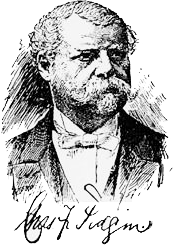 His spare time out of office Pidgin devoted not only to inventions, but also to literary work. Besides being a frequent contributor to periodicals, he wrote and gained even greater prominence as an author of many books, librettos for cantatas, operas, and musical comedies, than as a statistician and inventor.

Pidgin’s musical comedy adaptation of Peck’s Bad Boy was first produced in 1883 and ran for many years. Pidgin’s first and most popular novel Quincy Adams Sawyer, published in 1900, was aggressively marketed by his publisher, C.M. Clark Publishing, sold over 250000 copies for several years, and later was adapted for the stage and films. His next novel, Blennerhassett; or, The decrees of fate (1901), was sold over 60000 copies before even appearing in print. The next novel of Pidgin from 1902, The Climax: or, What Might Have Been: A Romance of the Great Republic, envisioned an alternate history where Aaron Burr did not kill the president Alexander Hamilton, and later became president.

Charles Pidgin married three times. He married his first wife Lizzie Abbott Dane on 3 July, 1867, but she died next year, in June, 1868. In November, 1873, Pidgin married to Lucy Sturtevant Gardner (1850-1896), who became a doctor and practiced medicine until her death of heart disease in June, 1896. Pidgin’s third wife was Frances Fern Douglas, they married in July, 1897.

Charles Felton Pidgin died at his home in Melrose Highlands, Massachusetts, on 3 June, 1923.